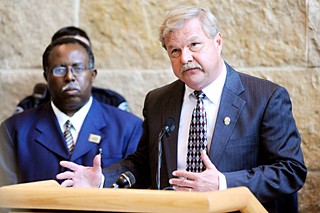 Something is happening inside the Austin Police Department's high-profile Organized Crime Division – what, exactly, depends on who you ask.

To hear the APD administration tell it, nothing out of the ordinary is happening in the division that handles major narcotics and human trafficking investigations, among other cases. Instead, the division has merely been subjected to a months-long review of operations, preparing for an eventual reorganization to better allocate limited human resources. To hear the officers' union tell it, on the other hand, OCD is currently in the crosshairs of a politically motivated power struggle that has already "ruined" reputations and, if successful, would strip the division of vital institutional knowledge essential to closing major cases.

According to Assistant Chief Troy Gay, there is nothing secret, or nefarious, happening in the division that houses nearly 100 sworn personnel – primarily detectives. Indeed, the heavy use of detective-rank personnel is partly what has prompted department brass to consider some reorganization of the division. Out of a currently authorized strength of 1,740 personnel, the APD has just 377 at the rank of detective/corporal (equal in rank). The department has been considering whether some of the OCD detective positions could be better utilized in other divisions – including both property and violent crimes – and whether much of the OCD detective work could be done by officers (there are currently 1,092 officer positions in APD).

No reorganization has yet taken place, Gay stressed, because no final plans for any changes have been drafted. He said he expects that a plan will be finalized within the next two months, and at that time personnel may be moved around – though he said that, in the end, he doesn't expect the makeup of OCD will really look all that much different than it does today.

That's not at all how the union sees things. Austin Police Association President Wayne Vincent says that a number of personnel working in OCD have either been told they're going to have to find a "new home" elsewhere in the department, or have been served with a "28-day notice" that they will be moved out of the division. Six of nine sergeants have already been replaced, as have three lieutenants and the division's former commander – all these changes occurring, Vincent says, without adequate explanation. He said the administration has the right to make personnel changes, but in this case he charges that there's been a wholesale shredding of a very productive division, in a very divisive manner.

Take, for example, the issue of the 28-day notices: That paperwork is generally provided to officers before a specific change is made to their working assignments, to allow affected personnel to plan for the changes – working out child care, or moving from days to nights, among other possibilities. In the case of the OCD notices, Vincent said, personnel were told that they'd be yanked from the division within a month and told to find somewhere to go – but with no direction about where or why that might be.

He cautions that the department has been down the OCD reorg path before, and that it ended in a lawsuit filed by the union. In the Nineties, OCD had a number of officers who were actually doing the work of detectives – above their rank and pay grade. That can't happen again, he says; moreover, he said, the department simply doesn't have enough officers available to take off the streets and to put into OCD. Gay responded that the department won't repeat those staffing mistakes. "Clearly, we're aware of the lawsuit and don't want somebody working outside of their pay scale," he said. Gay said that three OCD lieutenants were reassigned only as part of a department-wide lieutenant shuffle. A handful of additional personnel have also been moved (possibly temporarily) in connection with an ongoing Internal Affairs investigation, on which he cannot comment. Other than that, he said, "there were some people who were told that some changes" are coming to OCD, but no one has been told they're being moved, or has been told to find a new place to work.

OCD has, on occasion, been subject to unflattering headlines – such as last year's move by several investigators to create so-called "lock boxes" (making chained-together protesters harder to disengage) that were then provided to protesters with Occupy Austin, which APD OCD investigators had infiltrated ("APD Infiltrates Occupy," Sept. 7, 2012). The use of the APD-provided devices meant OA members were charged with felonies after being arrested at a Port of Houston action, instead of a misdemeanor charge of blocking the road that would've come from simply locking arms. In another story we reported last year ("APD's Sleep Disorder," Aug. 24, 2012), some members of OCD have demonstrated their more callous sides over the last several years by using city computers to send harassing emails to a colleague who suffers from narcolepsy.

Gay insists that considering a reorganization of the division is routine. "People are trying to say the changes have been made because of an event or situation," he said. "No, this has been planned," he continued. "We're moving people all the time" where needs arise.

Vincent isn't buying it. He says he has the stack of notices to prove the brass isn't playing it straight; one officer has decided to retire in the face of an uncertain future, and others have been labeled as "lazy." "If the administration says nobody's been moved other than three lieutenants and a couple other people in connection with an Internal Affairs investigation, then I am definitely concerned about the communication methods of this administration," Vincent said. No one has seen any details about a reorganization and yet "we have documents to prove" that notices have been issued. Vincent says that in the absence of straightforward communication from the administration, there's been rampant speculation about what's really going on. He says what's really afoot is a power grab by high-ranking administrators who want to control OCD, home to the department's most sensitive operations and investigations. "Let me put it in a nutshell," he said. "This is an internal power struggle and there's no adult at the top to stop it."