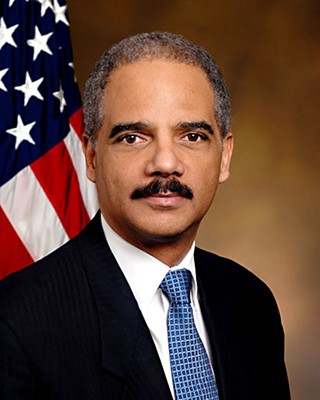 In an Aug. 29 letter to all U.S. attorneys, Deputy U.S. Attorney General James M. Cole said that the federal government will not – for now, at least – take legal action to challenge laws in Colorado and Washington passed by voters last year that legalize and regulate the use and sale of marijuana by adults. As long as those states "have also implemented strong and effective regulatory and enforcement systems" that keep dope, and funds associated with its trade, from diverting to the black market or to kids, he wrote, the feds are happy to have state and local law enforcement police the system.

The Cole letter, bearing the authority of A.G. Eric Holder, comes 10 months after voters in those states passed by hefty margins ballot initiatives that have legalized marijuana possession and use for adults, and have created regulated schemes for drug production, distribution, and sale. However, marijuana remains illegal under federal law, so reform advocates (and officials in Colorado and Washington) had been waiting since November to see how this new wrinkle in the whole federal pot-prohibition scheme would unfold. Early on there were signs that the feds might go this route – evidenced in part by a December interview of President Barack Obama by Barbara Walters. The feds have "a lot to do when it comes to criminal prosecutions," Obama told Walters, and going after recreational tokers in states that have "already determined that it's legal" for adults to use pot isn't exactly a top priority for federal law enforcers.

That's exactly the note Cole struck in his four-page memo, released last week. Although "Congress has determined that marijuana is a dangerous drug and that the illegal distribution and sale of marijuana is a serious crime that provides a significant source of revenue to large-scale criminal enterprises, gangs, and cartels," the feds are committed to using "limited investigative and prosecutorial resources to address the most significant threats in the most effective, consistent, and rational way." Cole said the federal government will take a hands-off approach to pot law enforcement in states that have legalized its use so long as certain objectives are met – including strict tracking of profits to ensure no money flows to drug cartels or other gangs, preventing diversion of pot from states where it is legal into those where it isn't, prohibiting the sale or marketing of pot to minors, and preventing legal state-level pot activity from being used as a cover for trafficking other drugs, among a host of specifics included in the letter. "These priorities will continue to guide the Department's enforcement of the CSA [Controlled Substances Act] against marijuana-related conduct," Cole wrote. Thus, federal authorities should "focus their enforcement resources and efforts, including prosecution, on persons or organizations whose conduct interferes with any one or more of these priorities, regardless of state law."

For the most part, pot law reformers have embraced the news, but remain cautious. Indeed, this hands-off message has come from the feds before – notably after Obama took office and the DOJ in 2009 said it would make policing pot in states that have legalized medical marijuana a low-level priority. That promise was effectively reversed in 2011, when Deputy A.G. Cole distributed a memo to "clarify" that earlier position, concluding that persons "in the business of cultivating, selling, or distributing marijuana, and those who knowingly facilitate such activities, are in violation of the Controlled Substances Act, regardless of state law."

Nonetheless, Neill Franklin, a retired 34-year law enforcement veteran who now serves as executive director of the drug law reform group Law Enforcement Against Prohibition, suggests that pot prohibition may have turned a significant corner. "This is the most heartening news to come out of Washington [D.C.] in a long, long time," he said in a statement. "The federal government is not simply standing aside and allowing the will of the people to prevail in these two states, the attorney general and the Obama administration are exhibiting inspired leadership. The message to the people of the other 48 states, to all who value personal freedom and responsible regulation, is clear: Seize the day."

Posted here is the Aug. 29, 2013 Letter Memorandum to U.S. Attorneys from Deputy Attorney General James M. Cole concerning enforcement of federal laws concerning marijuana use in states legalizing use and possession for adults.