So Special: The Race to Replace Mark Strama [UPDATED] 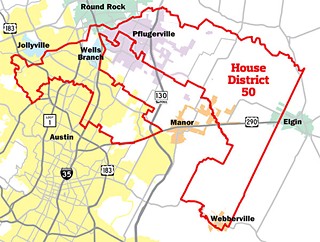 Rep. Mark Strama's abrupt late June resignation from his state House seat – to run Austin's new Google Fiber project – has triggered one of the most unpredictable shows in Texas politics, an off-year special election. And the relentlessly GOP-gerrymandered House District 50, which Strama represented for almost a decade, seems set to become the playing field for a remarkably diverse group of contenders.

On a map, the district, which includes portions of Austin, Manor, Jollyville, Elgin, Pflugerville, Round Rock, Webberville, Wells Branch, and sections of unincorporated Travis County, looks sort of like a lobster throwing a punch. A nominally Republican area a decade ago, HD 50's gotten a little bluer, a little wealthier, and significantly more diverse. In that respect it's like the state at-large. The district leans Democratic, but the short special election timetable (Nov. 5, with early voting beginning Oct. 21) and a ballot "open" to all comers suggest that any of the candidates might eke out a victory in a race which could be decided by a few hundred votes or less.

Three Dems Plus One

The Democratic slate is largely defined by how much preparation the would-be candidates were able to undertake before Strama's sudden resignation – he had long said he wouldn't run again, and was widely expected to run next year for mayor of Austin. No one knew he'd quit mid-term to take a high-profile private sector job. The declared candidates, in turn, are running fast in an effort to define themselves to still low-information voters.

Jade Chang Sheppard is the Taiwanese-American owner of Gideon Contracting, a San Antonio-based construction company specializing in military contract work, and touts her experience as a successful business owner and ground-up entrepreneur. She also emphasizes her experience as a volunteer, advocating for Planned Parenthood and Annie's List. "Empowering women and girls has always been important to me. Less than 20 percent of our legislators are women," she says. She entered the race, she says, in part because she recognizes that "to fill that pipeline, we need to get women running"; she's also said she wants to enter the House to "protect programs and policies that help ordinary people."

Sheppard speaks confidently of her campaign's organizational advantage, saying she has "one of the best possible teams in state politics." As of the last reporting period, Sheppard's ahead in fundraising, with more than $82,000 raised in addition to a self-loan of $100,000 – a sign of how seriously she takes her chances.

Rico Reyes is the Hispanic son of community organizers, and his slick website recounts his rise from "humble circumstances": a childhood home with an outhouse and a wood-burning stove, working his way to Harvard followed by a UT MBA and law degree. He's served in the Marines and as an assistant D.A. for Travis County. With that history, he touts an emphasis on social mobility – "education, health care, and middle-class jobs" – as well as his long personal roots in HD 50, which may lend him an edge in name recognition. Reyes reported raising nearly $70,000 in mid-July, including five grand from former gubernatorial candidate and Houston lawyer Bill White, along with a $25,000 self-loan.

Celia Israel is a longtime local political activist and real estate agent whose experience in politics includes a stint as an aide to former Gov. Ann Richards, and she has described her Richards campaign experience as "exciting, amazing, historic." In 2004, she ran a losing race against incumbent Ron Davis for 1st Precinct County Commissioner. One of two openly gay candidates in the special election, she emphasizes as her core issues higher and public ed, the environment, and equality. Israel lags in fundraising, with $50,000 raised by the first reporting deadline, but she's gathered some early endorsements, including state Rep. Eddie Rodriguez from East Austin.

Also deserving of notice is Ramey Ko, an attorney and Dem activist who, thanks to the surprise special election, didn't yet meet the residency requirements to run – but says he expects to run in the March Democratic primary for next year's regular election. (In effect, he's been campaigning for that primary alongside the other candidates.) Another longtime community and political activist, he's volunteered for Barack Obama since 2004, is a member of the President's Advisory Commission on Asian American and Pacific Islander communities, and also serves on Austin's Public Safety Commission. Ko speaks fluently about both politics and policy, and started a law firm within HD 50's borders which specializes in immigration and business law. He's got deep party connections, and over $115,000 in the bank as of July 15.

Ko says that he won't run next year against a de facto incumbent if it would hurt the Democratic Party, a position more or less echoed by the other candidates (each of whom officially expects to be that incumbent). But he also noted that he anticipates a run-off in the special, scheduled to occur Dec. 10, the day after the Dec. 9 filing deadline for the March primary. "So no one is going to know the winner at that time," Ko said. "And we'll all be pretty much in the same position, having to make a decision." It remains to be seen if Ko's running-while-not-running status will have an effect on the campaign outcome.

The Republican field is a more motley, even incomplete, crew. GOP campaign operative Donald Dean made a splash in July when a tweet by the Texas Tribune's Ross Ramsey announced Dean would be dropping into the race with a quarter million of his own money – no small sum for a House race – but no one's heard from him since. Other candidates doubt he's actually running. [Update Sept. 6: Filings closed Sept. 4 without Dean among the candidates.]

Michael Cargill* is a libertarian-leaning, gay, African-American gun store owner and trainer, who in 2012 made a quixotic run at the Democratic nomination for 2nd Precinct Constable. Campaigning in part to expand concealed-carry laws, Cargill garnered the support of libertarian activists and the deep pockets of Tyler lumber heir John Ramsey, and livened up the race by branding his opponent, Adan Ballesteros, the "cocaine constable" and accusing him of complicity in cross-border drug trafficking. The two candidates filed reciprocal defamation suits – which Cargill indicated are still pending. [Update Sept. 6: Despite repeated assurances he was running, Cargill never filed for the office and announced Sept. 5 he is endorsed Mike VanDeWalle. For more detail, see *below.]

Despite his declarations of Democratic loyalty, on election day Cargill lost handily. His party switch, though, might not be his biggest problem. His last TEC filing reported only $28,000 pledged to his campaign, $19,000 from two women in "Snailville, Georgia." (That's not a place; though there's a Snellville.) In his last election, he attracted a great deal of support from libertarian-leaning organizations, including the Liberty For All Super PAC, run by 22-year-old millionaire Ramsey, with whom Cargill indicates he still has a "good working relationship." He expects "to have twice the support this time around." Cargill's building his campaign around opposition to a Northeast Austin trash dump, and "support for our veterans."

The most substantial Republican candidate appears to be Jollyville chiropractor Mike VanDeWalle. VanDeWalle, who announced his candidacy in mid-August, says he was approached in June by members of the Texas Chiropractic Association, who've long had beefs with the Legislature over licensing issues. Any Republican has a hill to climb in HD 50, but VanDeWalle says his message of low taxes, "effective health care," and the "defense of life and liberty" – he's endorsed by the Texas Alliance for Life – will shine through in the "very pro-business" district.

The Chronicle's Wednesday press day coincided with the Sept. 4 closing of the filing, and it appears the slate is complete. Early voting begins Oct. 21, and if no candidate gets a majority, a run-off will be held Dec. 10. A 2011 special election run-off in HD 14 was decided by about a thousand votes. With at least five [Update Sept. 6: four filed candidates] candidates in the HD 50 race and no clear front-runner, the next few weeks should provide a look into the unpredictable vagaries of local and retail politics.

*[UPDATE Sept. 6.] And then there was one (Republican). Central Texas Gun Works owner Michael Cargill announced Thursday morning he was putting a halt to his nascent campaign and endorsing his fellow GOPer Mike VanDeWalle, citing a desire to pursue gun rights advocacy outside of the Legislature. Cargill said he had been in talks with VanDeWalle's campaign to drop out and endorse the Jollyville Chiropractor for several weeks, but "wanted to be sure that VanDeWalle was solid on the issues I care about." (He also said he had made his decision late Wednesday night/early Thursday morning – although the filing deadline was in fact Wednesday at 5pm.)

VanDeWalle's a bread-and-butter economic and social conservative, while Cargill's politics, beyond expanding access to guns, have been more … idiosyncratic. It's hard to guess what issues they have in common — but Cargill, who ran his last campaign as a Democrat, says he "wants to see the Republicans take back that seat. And Dr. Mike's the person who's most capable of that." And though the district leans Democratic, VanDeWalle's now unopposed claim to GOP support increases the probability he'll show up in the December 10 runoff.