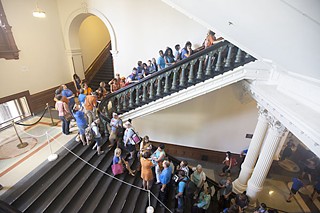 A scene from the legislative debate on abortion: The line of people waiting to sit in the Senate gallery trailed down three staircases. (Photo by Jana Birchum)

Orange-shirted supporters of reproductive rights appeared before the State Health Services Council on Aug. 29 to express concerns about the impact of enforcement of newly enacted abortion regulations on access to abortion care and family-planning services for Texas women. In response, the council declined to sign off on the new rules when no member would second a motion to pass them. But that decision not to act – the first such move on an abortion-related issue that council watchers recall the advisory group making – will not slow the state's plan to roll out the new requirements at the beginning of 2014.

At issue are requirements embodied in the controversial omnibus abortion legislation, House Bill 2, passed in a second-called special session, which bans abortion after 20 weeks, tightens regulation of medicinal abortions, requires doctors who provide abortions to have hospital-admitting privileges, and ensures that abortion clinics meet standards applied to ambulatory surgical centers.

It is on that last issue – changing standards for abortion facilities – that the council, an arm of the Department of State Health Services that approves administrative rule changes, considered testimony last week. DSHS is tasked with implementing the provisions of HB 2, Kathy Perkins, DSHS' assistant commissioner for regulatory services, told the Perry-appointed council, and to do so the agency tracked and merged portions of existing abortion facility regulations with those in place for ASCs. Notably, Perkins said, the new law does not require abortion facilities to be "licensed" as ASCs, but instead requires that clinics "meet minimum standards" applied to their surgical center counterparts. "[A]nd that is a key difference," Perkins said. As such, the ASC regulations were not "adopted whole" by DSHS in creating new regulations for abortion providers, she noted. Still, it's likely a distinction without much difference for the 36 clinics now regulated solely by the state's already strict abortion facility requirements.

Indeed, ASCs – day-surgery centers that handle a variety of surgical procedures requiring anesthesia and actual surgical incisions – are subjected to a host of regulations, many of them costly facility plant requirements – including regulations about the size of operating rooms and hallways, and requirements for air-flow controls, issues critical when actual surgery is performed. Those are requirements that abortion facilities will have to meet if they want to continue providing abortion care in Texas. But other requirements for ASCs – including state reporting requirements and inspection intervals – will not be applied to abortion providers. That means abortion facilities will not only need to transform their physical plant to meet the elaborate ASC standards, but will also have to continue complying with other abortion facility regulations already in place – regulations that are actually far more strict than those currently in place for ASCs, including a requirement that all abortion providers face yearly inspection. ASCs are only required to be inspected every three years (though, according to testimony provided at the Capitol earlier this summer, it's not uncommon for ASCs to go as long as five or six years between inspections because of a lack of DSHS personnel).

The ASC regulations go overboard, advocates for reproductive rights continue to warn, and their costly nature will likely force the closure of all but five of the state's abortion providers, facilities already operating as ASCs. Abortion is not a surgical procedure, they note, it is a medical one, where patients are awake during the procedure and able to walk after it is finished, unlike patients seeking a myriad of services at one of the state's ASCs.

As such, a number of witnesses testifying before the council suggested that DSHS should mitigate the damage likely to be done by the new law by creating "waivers" from ASC requirements, or to allow for the grandfathering of facilities in good standing with the state. That, however, is not possible at this point; because the text of HB 2 did not contemplate any exceptions, neither can DSHS regulators, says Carrie Williams, director of media relations for DSHS.

But without intervention, witnesses said, Texas is on the precipice of traveling back more than four decades, to a time when abortion services were still sought after, but were unregulated and unsafe. "Without your assistance" to mitigate the coming damage, longtime East Austin resident and activist Ora Houston told the council, "this will be the kind of health care Texas will provide: unsafe and inadequate."

The regulations will now be sent to Health and Human Services Executive Commissioner Kyle Janek for posting in the Texas Register, where they will be open for additional comments. The rules must be adopted and ready to go by Jan. 1, 2014. The ASC standards requirement is not slated to take effect until next fall – in theory giving abortion providers an opportunity to transform their operations.

Meanwhile, a lawsuit seeking to block enforcement of the omnibus regulations package is expected to be filed this fall.