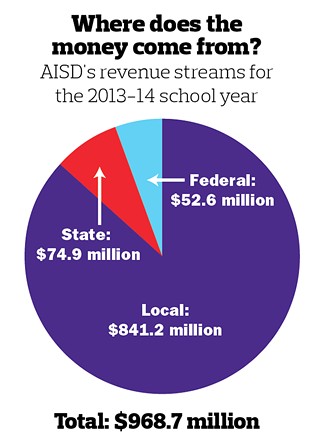 With the state keeping its money in its pocket and voters wary of tax increases, Austin ISD has passed its third successive deficit budget. But among the financial concerns, the district has found ways to put at least a little extra cash in employee salaries, as well as providing health benefits to unmarried couples.

On Aug. 27, AISD approved a $997 million spending budget for the 2013-14 school year. However, district financial staff have only forecast $968 million in revenue. To bridge that gap, AISD will pull down its fund balances by roughly $33.4 million – $31.7 million of that coming from the district's general fund, the rest from the food service fund. However, neither will be left with a big hole: Even after the predicted withdrawal, district number crunchers predict $216 million in the general fund and $6.5 million in the food fund by August 2014. The district's third fund, debt service, is actually predicted to rise by $5.4 million to $37.8 million by the end of the school year.

The board also decided to keep the combined tax rate paid by district property owners static at $1.24 per $100 of property value. That cash will be split into two pots: $1.08 for maintenance and operations (the day-to-day running costs of the district) and $0.16 into interest and sinking (covering debts and bond repayments). However, while the tax rate has stayed flat, the total local revenue received by AISD has increased year on year since 2011. This year, district staff predicts a 6.43% increase in total local revenue, mostly from rising property values, which jump 6.66% from $764 million in FY 2013 to $819 million in FY 2014.

However, the district will inevitably have to find a solution for that deficit. For five years in a row, trustees have demurred on raising the maintenance and operation (M&O) rate. Due to Texas' labyrinthine local tax system, unlike other local entities, the board has to go to voters to get voter approval for a raise to the M&O rate through a tax rollback election (TRE). The last time they did that was 2008, when voters approved a 3.9 cent increase to cover a long overdue employee pay raise. Ever since then, the administration and the board have been leery of going back to voters. This year, Education Austin President Ken Zarifis said that "they're talking TRE the same way we were talking three years ago." Yet with the failure of two of the district's four bonds earlier this year, and the still-pending ruling from Judge John Dietz on the legality of the Texas public school finance system, Zarifis said, "We just have to find the right time to do it." 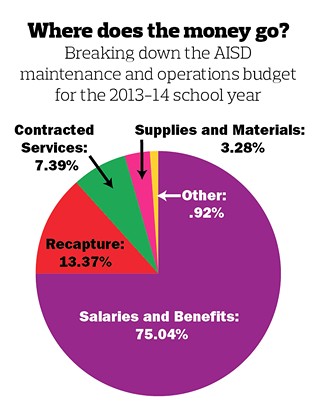 That increased property tax revenue for the district has a flip side: increasing tax bills for staff. In an effort to keep AISD competitive as an employer, the budget also includes improvements for staff. Firstly, a payment increase equal to 1.5% of their salary, and secondly, the long-awaited introduction of domestic partner benefits.

That 1.5% payment increase is specifically and technically not a pay raise. In 2013, trustees approved a 3% one-off payment to all employees. This year, they made that one-off 3% increase a two-off, by extending it for a second year. In addition, they added that extra 1.5% cost of living increase. Zarifis expressed disappointment that the board had not made either raise permanent, nor do they count toward staff pensions. He said, "The district needs to make the 3 percent a part of the budget. You can't pull it away, not after two years."

While staff will undoubtedly be glad of the extra cash, it raises old questions about how the district handles salary parity. During the last two pay raises, the board adopted a policy of across-the-board percentage raises: Put simply, that 1.5% increase means a lot more cash for Superintendent Meria Carstarphen's $283,000-a-year paycheck than for an Austin PD officer or head custodian on $40,000 a year – or a bus driver on far less. Chavel Lopez, labor coordinator with the Southwest Workers Union, criticized the proposal, telling trustees there had been "no good-faith effort made by the board and the administration to bring a lot of the classified workers out of poverty."

The cash will have the most immediate impact on district workers, but the domestic partner benefits are more politically significant. Starting in December, eligible individuals who have cohabited with an AISD employee for more than a year will be able to sign on to receive district benefits. In an August 28 media briefing, Carstarphen said, "This is another way we believe that we're making our total compensation package more competitive."

Again, it's not quite as clearcut as it seems. The board originally approved the introduction of domestic partner benefits in March, but Carstarphen conceded that there had been "legal obstacles" to their introduction. Foremost of them was an April opinion by Attorney General Greg Abbott that the policy would violate the Texas Constitution (see "AISD: No Partner Benefits ... for Now," July 5). Cue several months of research to come up with a definition of qualifying individuals that the district believes will give them sufficient legal protection from Texas' institutional homophobes. Other than the change of name from "domestic partner" to "qualifying individuals," the policy is basically identical to what was approved by the board six months ago.

Such benefit packages – generally dubbed "Plus One" – have become an increasingly popular way for local government and educators to end-run state government edicts against treating same- or even opposite-sex partners like spouses. Applauding AISD's actions, Equality Texas Executive Director Chuck Smith said, "The eligibility criteria for Plus One benefit plans are based upon financial dependence or interdependence. ... Plus One benefit plans will increasingly serve as a model for governmental employers who wish to remain competitive with corporate and private sector employers."