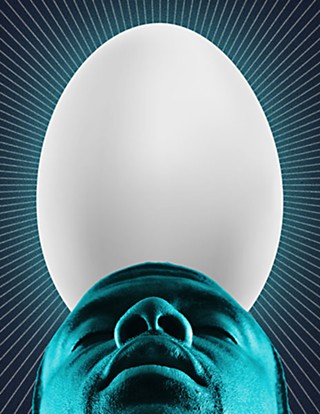 I'm on my back in a dimly lit room on the seventh floor of a Dallas research hospital. A device roughly two feet tall resembling an oversized egg is wheeled up behind me, its single blue clawlike appendage nestled possessively over the top of my head. "How's that?" the doctor asks.

A thumb drive containing my information is inserted, and a man's tinny voice buzzes from within the plastic shell announcing that a session is available. "Lie still with your eyes closed. Treatment begins in five, four, three, two, one. Treatment begins now."

Welcome to the future of psychiatric care: low lights, an old massage table, and three spinning magnets. In a world seemingly awash in chemical solutions and all the hardship that has come to entail, prepare yourself for the rise of bioenergetic medicine. In the six-week, double-blind study sponsored by device manufacturer NeoSync, neither I nor the doctor administering treatment know if the ergonomic appliance vibrating on my head is generating a potentially therapeutic magnetic field or merely rattling in place.

"OK. I'll be back to check on you," says the lab-coated doctor in calf-length boots and with long, springy curls, as she drifts past a sign warning of strong magnetic fields. I'm to keep my eyes closed but not fall asleep. If the device, an object of intense interest at 16 human clinical trials taking place around the country, is indeed functioning, there should be three magnets spinning inside, generating an energy field timed to oscillate across my brain's surface at the same frequency as my own unique alpha wavelength of 10 cycles per second.

The hope is that the energetic boost delivered by that magnetic field will stimulate patches of my brain that have grown quiet, if not dormant, stilled by decades of drug-resistant depression. I try to imagine what these awakened neurons – transmitters that in healthy brains communicate things like happiness and pleasure – would mean, before cursing myself quietly, as depressives will do, for thinking things could be different.

So many doomsday predictions didn't come to pass in 2012. No supervolcanoes shook the earth or blacked out the sun. No sudden magnetic pole shifts wreaked havoc on GE, Telefon, Boeing. Sadly, no interstellar conquest came to subjugate our wayward species. A space rock fell, but it arrived two months late to a less-than-catastrophic result over Russian skies.

Yet when December 21, 2012, dawned on Texas – the widely publicized "last" day of the Mayan calendar – I was hemmed in on all sides, a defeated, humiliated wreck consigned to spending my days on the couch, moving unsteadily from room to room in an increasingly thick, pharmaceutical-induced haze. After decades of battling depression, an explosion of daily panic attacks leading to a deepening despondency brought me to the point of psychological collapse, hastened my departure as editor of the San Antonio Current, and forced me to grudgingly accept that I was disabled at 42.

While it took months to get an appointment with a psychiatrist, the array of drugs that followed – daily doses of Prozac, lithium, Wellbutrin, Klonopin, and sleeping pills – likely saved my life. However, my new chemistry felt like engaging the gears of a duller, more drawn-out death. I became a strange creature; cautious, methodical, and distant.

I holed up, terrified of having to explain my sorry state, watching seasons of old TV dramas. I volunteered once a week in a down­town church basement that doubled as a homeless services center, the only place I felt a sense of belonging or acceptance. And that's where things could have stalled for a very long time, as they do for many diagnosed with a mental illness, grudgingly coming to terms with newly restricted abilities punctuated by periodic breakdowns, medication tweaking, and dim hopes to one day be of use to someone again.

A suicide scare led me to the ER and, later, into an outpatient program at a mental-health facility where doctors recommended electroconvulsive therapy, historically the treatment of last resort for depressives. But I already had my eye on something else, a magnetic treatment I had written about two years earlier: a safer, noninvasive therapy called transcranial magnetic stimulation.

Of course, my case was far from unique. These days, depression touches everything. It is the leading cause of disability worldwide in terms of lost work, draining the U.S. economy of an estimated $36.6 billion per year. By 2030, the World Health Organization expects depression to be the most damaging illness – socially and economically – in upper-income countries, outdone only by HIV/AIDS and early childhood mortality elsewhere.

Despite these epidemic numbers, cultural stigmas surrounding mental illness and the lack of resources allocated to assist the suffering mean as many as half of the afflicted never receive treatment for their conditions in this country, according to the WHO. In a report released on World Mental Health Day, October 10, 2012, UN Secretary-General Ban Ki-moon took the opportunity to call for a more honest and open dialogue about depression, what he called an "under-appreciated global health crisis."

It's strange to think that an epidemic estimated to impact 350 million people around the globe still needs defining. There should be no mysteries, no surprises surrounding any "global health crisis." Biolo­gist, author, and former depression-sufferer Lewis Wolpert struggled to give the illness its due by naming his 1999 work Malignant Sadness to "emphasize the very serious nature of a depressive illness and also to reflect my conviction that normal sadness is to depression what normal growth is to cancer.

"Severe depression borders on being beyond description," he continues. "It is a quite different state, a state that bears only a tangential resemblance to normal emotion." Symptoms include a scattershot of maladies such as sadness, numbness, dullness, apathy, suicidal thoughts, crying spells, irritability, anger, insomnia, lethargy, fatigue, hallucinations, delusions, difficulty concentrating or making decisions, hopelessness, loss of self-esteem, anxiety, hypochondria, loss of interest, inability to feel pleasure, and on, and on.

But perhaps the strangest thing about depression is that despite hundreds of millions of dollars sunk into research and treatment over the years, and the seeming discovery of one miraculous drug after another, mental illness in America is still booming. While the number of adults in the United States on disability due to mental illness has climbed from roughly 500,000 in 1950 to 1.25 million in 1987 to 3.97 million in 2007, the real tumult is happening among those still transitioning into the workplace. A 2008 report of the U.S. General Accounting Office reported that one of every 16 young adults – or 2.4 million – between 18 and 26 had a "serious" mental illness in 2006. And even that figure is likely to be greater than reported, since the incarcerated, institutionalized, and homeless – populations known to harbor high numbers of mentally ill – were not counted in the study.

Either there is something in the metaphorical water or there is a serious problem with the way mental illness is diagnosed and treated. Or both.