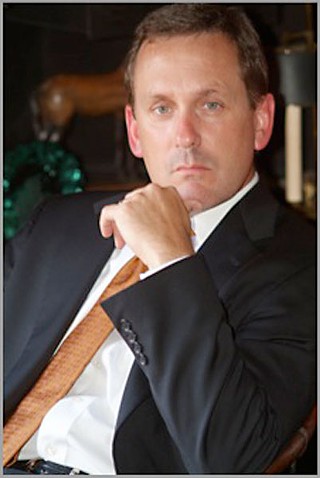 Gov. Rick Perry may be spending less time this fall thinking about running for president and more time preparing for court. As he was announcing that he will headline the California Republican Party's annual convention in October, San Antonio Senior Judge Robert C. Richardson named attorney Michael McCrum as the special prosecutor investigating whether Perry tried to strong-arm Travis County District Attorney Rose­mary Lehmberg into resigning.

McCrum will investigate a complaint filed by Texans for Public Justice that Perry broke state law by threatening to defund the Public Integrity Unit – the state's prime investigator of political malfeasance – unless Lehmberg quit. TPJ Director Craig McDonald said, "The governor overstepped his authority by sticking his nose in Travis County's business. ... Threatening to take an official action against Lehmberg's office unless she voluntarily resigns is likely illegal."

One of Texas's most distinguished and award-winning lawyers, since 2000 McCrum has specialized in white collar crime defense. However, prior to entering private practice in 2000, he spent a decade as an Assistant U.S. Attorney for the Western District, specializing in prosecuting racketeering, drug, and money laundering cases. Significantly, he should be politically acceptable to both major parties. In 2010, he was the top contender to be President Obama's nominee for U.S. Attorney for the Western District, and had the backing of the state's two Republican senators, John Cornyn and Kay Bailey Hutch­i­son, before he withdrew his name.

Many Republicans dislike having the PIU in pro-Democrat Travis County. However, the proposed option – placing it within the Attorney General's Office – seems even worse. Only hardline radicals, such as Rep. Phil King, R-Weatherford, have seriously pushed any measures to clip the office's wings (see "What Happens Next," May 13). Lehmberg's April DWI conviction opened the door for Perry to try to push her out. Democrats panicked, because if Lehmberg quit, Perry would appoint her replacement. However, the overwhelming majority of lawmakers, both Republicans and Democrats, wanted nothing to do with Perry's threats, and he was reduced to using a line item veto on the state budget to get his way. On June 14, he announced the cut, writing in a veto statement, "I cannot in good conscience support continued State funding for an office with statewide jurisdiction at a time when the person charged with ultimate responsibility of that unit has lost the public's confidence." Travis County commissioners have since voted to fill in $1.8 million of the $3.7 million Perry sliced from its 2014 budget, but the unit has already had to shed staff and cut its caseload. 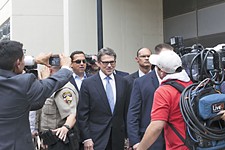 Perry: Welcome to the 'Lavatory'
Perry fights charges; has an "oops"