Much Heat, Some Light at Forum on APD Shooting 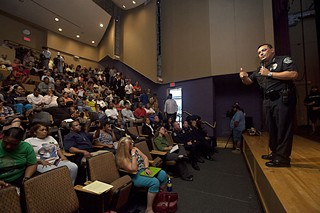 Jackson's family was in the audience, and Acevedo extended his condolences to them. He said he couldn't discuss the shooting in detail, to protect the investigation and any outcome, but that he had expedited the internal investigation, and hoped to have it completed within 45 days. "We need this first step," he said, "to get to the truth."

Many in the audience loudly declared their conviction that the APD and other officials cannot be trusted to get to the truth. The Aug. 15 forum was sponsored by the East Side Coalition, and moderator Kenneth Thompson Sr., from KAZI radio, said the event would be "about listening, providing solutions, and about getting to engagement." Asking the crowd to respect each other and the speakers, he insisted, "It is going to be civil." The Coalition founder, Anthony Walker, reiterated, "We are seeking solutions so we can get justice."

First to speak was Jackson's friend and co-worker, Tanya Ware, who said she wanted the audience to know, "Larry was a wonderful person, a very good friend of mine." She spoke of growing up with his wife, and of his kindness and care for his family and children. She concluded emotionally, "I would like for everybody to know, he was a good man, and an all-around great person."

Acevedo followed Ware, and publicly extended his condolences to Jackson's family. He said two investigations of the shooting are ongoing – internal APD and a criminal investigation as well – and that when they were completed, they would recount "the good, the bad, and the ugly" of whatever happened. He advised audience members, in whatever circumstances when confronted by police, "Please don't run," because too many bad things can happen. But he also reiterated several times: "It's not a justification" for the shooting. (Audience members would later criticize him for "blaming the victims," and several insisted that in light of previous APD shootings and other actions, it's all too understandable why young black men would run from police.)

Acevedo insisted that APD officers are held to a high standard, and that despite criticism to the contrary, he has indeed dismissed officers who recklessly use lethal force, or even "less than lethal force," citing several instances. He insisted APD policies and procedures have steadily improved during his tenure, and he asked the audience to "judge each case individually," and to "let the process take place."

Numerous audience members were unconvinced. In several "questions" that were more precisely declarations, speakers denounced the police for "murdering young black men." To applause, one woman said, "The dogs in Austin get more respect than young black males," and a man demanded that Acevedo resign, concluding that if he would not, "I hope you burn in hell!" Similar denunciations flew loudly from the audience until the moderator requested order and returned to the scheduled program.

Attorney Adam Loewy, who is representing the Jackson family, denounced the still unofficial description of the shooting as an "accidental discharge," calling it instead "a criminal act." He said the grand jury procedure favors the police, and that prosecutors spin the evidence to grand jurors, and he specifically accused District Attorney Rosemary Lehm­berg of "selecting grand jurors with a result in mind." (Previous discussion had addressed the Byron Carter Jr. shooting by APD Officer Nathan Wagner, whom a grand jury declined to indict.) Loewy said that he and his clients would press for "a public, criminal trial" of APD Detective Kleinert, who shot Jackson.

Lehmberg was not in attendance, but Assistant D.A. Gary Cobb followed, and in explaining the grand jury system, noted that grand jurors are appointed by judges (directly or indirectly through appointed commissioners) and the D.A.'s office plays no role in their selection. Cobb said that grand jurors see all the evidence available on the cases, and noted that it is difficult to get people to serve – "It involves a three-month commitment, two or three days a week" – but he encouraged audience members to consider serving.

Cobb was followed by Robert Muhammad of the Nation of Islam, who gave a fiery speech but spoke less of the specific incident than of the necessity of African-Americans to use "unity" – including even the notion of "secession" – to put an end to injustice. The concluding speaker was Nelson Linder of the Austin NAACP, who urged the audience to get politically involved, to work to change unjust laws that allow or even empower police to shoot people with impunity – and to "fire" those elected officials, from the City Council up to state and federal representatives, who do not act to change unjust laws. Calling on the memory of Ida B. Wells, who reported on and organized to stop lynching across the country in the 1890s, Linder recalled, "The lynchings did not end until the laws changed. These shootings will not end until the laws change."

For more photos of the forum, see austinchronicle.com, where this story originally appeared on the Newsdesk blog, Aug. 16. 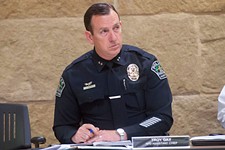