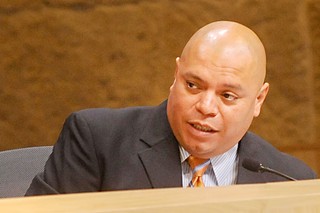 The City Council is waist-deep in budget deliberations, marked today (Thursday, Aug. 22) by a public hearing during the regular meeting to address the proposed property tax rate, which Council decided a week ago, following perfunctory deliberation, would be no higher than the staff-proposed actual rate of 51.14 per $100 assessed value. (A general budget discussion will also be in order today.) The ceiling vote, in advance of the formal Sept. 9 adoption of the tax rate, is required under state law; indeed, much of what happens during budget development is dictated by state law – and therefore by a Legislature historically determined to tie the financial hands of municipal officials as much as possible.

That said, based on the Council discussions thus far, it's clear there's little stomach among members for a hefty rate increase. Structural cost drivers have already raised the overall projected spending, leaving a roughly $29 million hole to be shaved or filled; simultaneously, rising property values will mean some additional revenue even should the rate remain at the current level (i.e., the nominal* rate) of 50.29 cents. By adopting the proposed staff rate as a ceiling – when they could have gone higher, to allow themselves more flexibility – members essentially declared they do not want to approach the rollback rate (requiring an election), and they are now looking for ways, if available, to reduce the rate even further – in search of, as the work-session phrase went, a "lean and mean" budget.

In that context, the City Council word of the week was "vacancies." CM Mike Mar­tinez had raised the issue ahead of the work sessions, telling reporters he "couldn't support" a budget in which departments were requesting new positions ("full-time equivalents" or FTEs) while they retained staff vacancies in jobs that had remained empty for six months or more. As Martinez saw it, already budgeted positions (where the money is not currently being spent) could be reclassified to allow those new hires, thus lowering overall departmental budget requests.

That quickly became a theme of departmental discussions in the work sessions – which almost as quickly reflected that it wouldn't be as simple as Martinez hoped. Budget staff noted that (although the vacancy number is a moving target) overall there are indeed more than 930 vacancies among the 12,000 or so total city staff, averaging in a staff that size a not-exceptional 5-8% vacancy rate at any given time. And many of those include the enterprise (revenue-generating) departments, which don't directly affect the General Funds budget at the center of Council's discussions.

Among the more than 560 GF vacancies, Deputy Budget Officer Ed Van Eenoo noted, many are in public safety and not readily reclassified, or (e.g., in the Police Department) affected by the up-and-down rhythm of cadet academy classes (part of the workforce) moving into sworn-officer status – where there is constant public and official pressure to increase the overall numbers in any case. Van Eenoo acknowledged that in particularly lean city years, hiring was frozen for periods as long as six months to a year, but that it can't be done wholesale without inevitably degrading city services.

As Van Eenoo estimated, that leaves only about 130 vacancies in non-public safety positions – not nearly the gift basket Council might have guessed. When Van Eenoo finished his snapshot presentation last week in response to Council's prior questions, Martinez said, "I think that's a good start." But he added that he would be raising the issue with every department, saying, "If departments are going to ask this Council to keep those vacancies, while still adding new employees, I just think there needs to be a justification for that."

As it happened, the first department head called to account was Municipal Court Clerk Rebecca Stark. Initially, she identified five unfilled vacancies at the court, which seemed to confirm Martinez's approach. Then – after a break – Stark returned to say that four of the positions were tied to designated grant funding (which can't be shifted), and the fifth was about to be filled. Martinez was visibly frustrated by the abrupt change in information, saying he would continue to press the question with every department.

So the issue didn't exactly disappear, but its impact may have become more diffuse – and perhaps as much political as financial. It's no secret that as many as four current Council members – Mayor Pro Tem Sheryl Cole, Martinez, Laura Morrison, and Bill Spelman, in roughly descending order of likelihood – are at least considering runs for mayor next fall, and some observers read Martinez's preemptive budget strike as an early campaign gesture. He later dismissed that speculation out of hand, but neither he nor anybody else on the dais would look forward to kicking off a campaign under the slogan, "I raised your property taxes!"

Indeed, by setting the maximum tax rate at 51.14, Council has effectively established the outer limit of its most important budget decision for FY 2014 – and to a degree, tied its own hands for next year's budget as well. Mayor Lee Leffingwell, hardly the biggest spender on the current dais, noted that a rigid approach to the "vacancy" issue might well establish an artificially low property tax rate – and thus a rollback rate for FY 2015 that would make it even more difficult for next year's Council (which until November, will still be this year's Council) to respond to real budgetary needs. "I think that this is something that you have to be careful with because if you use this sort of accounting gimmick to make it look like you have more revenue than you really do, or less expenditures – that if you choose to lower the tax rate you are impacting yourself in years ahead, because that is also going to lower your rollback.

"I'm already sorry to have to make that comment," Leffingwell added wryly.

*Correction: this passage originally read "effective" rate, in error; the effective property rate would be the rate that would raise the same total revenue as last year; at 48.43 cents, it is lower than the nominal rate of 50.29.