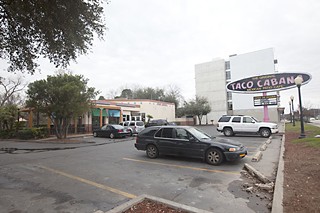 A 96-foot condo tower is slated for this site at South Lamar and Riverside. (Photo by Jana Birchum)

After numerous postponements, the Taco PUD finally got baked and served at City Council. There was singing, there were taco jokes, and there was a lot of opposition. But at about 11pm that night, Council voted 5-2 to approve the zoning change on the first of three required readings.

Developers Post Paggi are seeking Planned Unit Development zoning for the lot at 211 South Lamar, which is currently home to a Taco Cabana. The zoning change would allow them to build to 96 feet in height instead of 60, and that extra 36 feet (and the chance to get that extra height through PUD zoning) has spurred a lot of opposition.

The zoning was opposed by Council Members Laura Morrison and Kathie Tovo, and a healthy assortment of neighborhood groups, with the Zilker Neighborhood Association joined by the Bouldin Creek NA, the Barton Hills NA, the South River City Citizens NA, and Save Town Lake.

The Bridges on the Park Condominium Association had previously been among those opposing the development, but after nearly a year and a half of negotiations, BPCA spokesman Robert Wilson told Coun­cil they were close to a deal, officially neutral, and would withdraw their opposition entirely if an agreement is reached before the second and third readings.

For his part, Winstead PC attorney Steve Drenner reiterated the specialness of the project, and reminded those present that under the current CS (Com­mercial Services) zoning, developers had the ability to build a multifamily 60-foot project that would offer little in the way of amenities, community benefits, or how it interacted with neighboring condos or historic Paggi House.

Unlike CS zoning, PUD zoning requires "superiority." In this case, that means a sampling of community benefits including saving trees, providing retail and restaurants on the ground floor, water quality controls, a public plaza, and space for a bike-share program. Developers will also be required to provide a certain amount of affordable housing on site, or (more likely) pay a $430,000 fee in lieu to the city's affordable housing fund. CM Chris Riley firmly defended the project on those grounds, but many residents remained at City Hall late into the night to speak against the project.

Former Assistant City Attorney and current Assistant County Attorney Tom Nuck­ols, who lives in Barton Hills, warned Coun­cil members that their waiving of portions of the PUD ordinance would be open to legal scrutiny. Basically, Council has discretion to waive sections of the PUD ordinance, but only if it determines that the section being waived has been "substantially achieved." It's this loophole that allows Council to approve PUDs that are under the standard 10 acres (211 South Lamar is under an acre), which has been a bone of contention with opponents.

But in addition to objections about obstructed views or commercialization of the lakefront, one controversy Thursday surrounded the contribution developers are offering toward affordable housing. That $430,000 figure is in line with a recent reinterpretation of the ordinance by Coun­cil – based on the additionally granted square footage and not the entire building – but as currently codified, developers would be required to pay something more like $1.2 million into the city's Housing Trust Fund. CM Morrison said that discrepancy made it hard to justify such a big difference as "substantially achieving" the affordability requirements as written. "Is it a legal opinion that making an affordability contribution on, basically, a third of the amount of the square footage substantially achieves the objective of basing it on 100% of the square footage?" asked Morrison. "It just seems like it doesn't."

The question prompted a quick scramble by city legal, and a recommendation by Council that the third reading of the zoning change should take place after council has a chance to vote in a change to the affordability requirements in the PUD ordinance, presumably sometime in Septem­ber. The developer applicants said they could wait, so we'll likely hear at least one more chorus of opposition.

Perhaps that will give opponents more time to learn the words to a parody of Woody Guthrie's "This Land is Your Land," presumably titled "This Lake is Still Scenic for You and Me," that Zilker NA resident Pierre Riou rendered a cappella in what he dubbed, "Care ye, okay? [i.e., 'karaoke']"