The complicated system that is the Austin-Travis Co. EMS is nationally recognized for saving lives. As Austin continues to grow, can the system save itself? 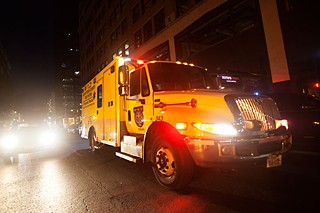 In the video, the man is flat on his back on the side of the road. He is unconscious and his heart is not beating.

Seconds before, the 68-year-old was riding his bicycle – and was, at the time he went into cardiac arrest, a few miles from the finish line of the annual MS-150 Houston-to-Austin fundraising ride. Fortun­ately, there are plenty of public safety personnel nearby. Two police officers on traffic duty react instantly and begin the deep, fast, and rhythmic compressions of modern CPR until the first paramedic appears on a motorcycle, followed in short order by an ambulance and crew.

While passing riders stare and traffic moves around them, the Austin-Travis Coun­ty Emergency Medical Services crew tends to the man; they are calm and collected under pressure. On the Austin Police camera video, time seems to slow as they move through their protocols for handling cardiac arrest patients. Within minutes, they've restored the man's heartbeat – quite literally, brought him back to life. They install him in the back of an ambulance, hit the lights and siren, and race off to the hospital.

Within days the man was discharged, sent home to Houston with his family. Although cardiac arrest accounts for just 0.5% of all calls for EMS service in Austin, according to the department – perhaps 600 of roughly 120,000 calls for ATCEMS service each year, notes ATCEMS Medical Director Paul Hinchey – such calls are among the most serious, time- and skill-critical emergencies that first responders and paramedics handle. Unless someone intervenes, death is virtually certain.

Responding to cardiac arrest is something that ATCEMS – in conjunction with "first responders," typically firefighters, all trained as emergency medical technicians – does well. ATCEMS has a higher than national average rate of survival for cardiac arrest patients. Since 2008, roughly 40% of all cardiac arrest victims whose collapse was witnessed (as with the MS-150 rider), and who are attended by ATCEMS and taken to the hospital, survive and are discharged (compared to roughly 30% of patients nationally). When it comes to patients whose cardiac arrests aren't witnessed and immediately tended to, ATCEMS still posts an average survivorship of 12%, above the national average of roughly 10%.

ATCEMS boasts a large number of highly trained paramedics, and both Austin and Travis County are rich in skilled first responders (trained, mostly, as basic emergency medical technicians). Both Hinchey and Ernie Rodriguez, director of ATCEMS, have been lauded for their interest in researching and implementing best practices to foster better patient outcomes. That's how the so-called "pit crew model" of dealing with cardiac arrest was born, says Hinchey – literally built on the approach a pit crew takes to assessing and servicing a race car: Everyone has a particular job, and the crew works in synergy. While the best of the city-county collaboration that is EMS is on display in incidents such as the April MS-150 rescue, that cohesion and focused sense of purpose belies a friction and seeming instability just beneath the surface. As much as the agency is succeeding on the ground, it is also an agency – a system – in transition. On occasion, glimpses of conflict bubble to the surface and into public eyes: In February, a volley of email-sniping between Austin Public Safety Commissioner Mike Levy and ATCEMS Employee Association President Tony Marquardt made headlines; there have been unflattering city audits of ATCEMS that questioned its approach to employee health and safety and its ability to manage bill collections; and as the spring progressed, there were accusations from Marquardt that county Emergency Services Executive Danny Hobby was endangering lives by withholding funding for a much-needed ambulance in eastern Travis County – among other notable scuffles.

In isolation, as they're invariably reported, these conflicts are difficult to decipher. Taken together, and in the context of an agency approaching it's 40th birthday (the ATCEMS system was chartered in 1978) and that must now determine how it will grow into its next 40 years amid a vastly different landscape – both in terms of local demographics and national changes to health care delivery – it's little wonder there are random flares of temper at meetings of the Commissioners Court, or furrowed brows during city PSC meetings.

Beneath the daily attending to patients and beyond the occasional alarmist headlines is an agency caught among various visions of how it should move into the future. There are those who believe ATCEMS should be consolidated with the Austin Fire Department; and those who believe the county should create its very own, countywide fire department using the 14 independent Emergency Service Districts that each currently provide fire suppression services for their own geographic areas, while retaining the stand-alone paramedic services of ATCEMS. There are also those who believe the county should create its own fire department-based EMS services; and there are those who believe the EMS system is fine just the way it is – as a stand-alone third service for emergency medical services across the city and county.

"We have incredibly fine EMS service. When the advanced-level service paramedics show up in an [ambulance], you are in extremely good hands," says Sarah Eck­hardt, former Travis County Commissioner and current candidate for County Judge. But, she continues, the county and city have grown so much, and health care reform is reshaping how public health institutions will function – she believes it's time to look at how to continue to deliver high-level care, while being smart about how we deploy resources. "All of this hand-wringing and fear and anxiety, it's all a harbinger of a good thing: We're finally talking ... about what we have and what we need. And that's causing a whole lot of [discomfort] because it means some things will probably change. In this case, we need some change."

ATCEMS is run by an "inter-local agreement." Paramedics are city employees, and the city-hired director, Rodriguez, oversees daily operations of the busy agency, including staffing and deployment of the various resources – including some four dozen ambulances, the majority of which are stationed inside the city limits. For years, the agreement between the city and county has essentially worked like this: The city funds the agency at roughly 75%, says Austin's Deputy City Manager Mike McDonald, and the county kicks in about 25%, without any additional breakdown of what, specifically, the funds are paying for. For a time that worked relatively well, stakeholders say, because most of the growth was happening in the city, and everyone agreed that it was worth it for the two governmental entities to collaborate in order to ensure continuity of care.

"I tell people all the time, even though you're living in the city, when you're facing a crisis you don't know where that crisis is going to occur," said McDonald. "You may not be at home." Eckhardt agrees: "If I have a car accident ... coming back from my son's soccer game at Northeast Metro Park, I want the same level of paramedic response" as someone would get in the middle of Downtown, she said.

But because of geography and the distances between county population centers, the response levels haven't been equal. The quality of the care has always been there, stakeholders note, but it hasn't necessarily been equally accessible. The "weakness" of the system, says Eckhardt, "is that our ability to serve the entire county – with its different terrain, its different population concentrations and the different types of calls from moment to moment – makes for really unequal service levels."