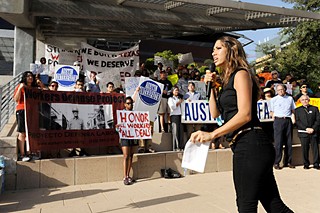 › Travis County Commissioners Court voted to approve a preliminary plan for the nonprofit Mobile Loaves & Fishes' residential "Com­mun­ity First Village" for 200 homeless people on a 27-acre tract on Hog Eye Road in eastern Travis County, expected to welcome its first residents at the end of 2014.

› In the wake of Sunday's DWI arrest of prosecutor Brandon Grunewald, Travis Co. District Attorney Rosemary Lehmberg said it has not been her policy to fire employees for first-time DWI offenses – such as Grunewald's or her own April arrest.

› Mark your calendars for Nov. 5, the day Austin voters will be asked to approve $65 million in bonds for affordable housing, one year after voters rejected a housing proposal that appeared on a crowded ballot in the general election. At the same meeting, Council announced their apparent intention to change the law to let PUD developers contribute less for affordable housing.

› The Independent Citizens Redis­tricting Com­mission has chosen an executive director, management consultant Craig Tounget, to run the ICRC's operations in planning to draw district lines for the 10-1 City Council to be elected next fall. They also expect to hire an attorney and a technical consultant to draft the maps.

› Electricity use is rising with the August heat wave; Aug. 7 marked the third highest demand ever for power on the state electric grid – roughly 67,000 of an available 74,000 megawatts – says the Electric Reliability Council of Texas.

› The Austin Independent Business Alliance says the city has cancelled its funding contribution of $60,800 for the nonprofit's refusal to hand over member email addresses and for other reasons that are unclear. The funding is (or was) used to operate AIBA's independent business ("IBIZ") districts across the city.

› The announcement of a run for governor by Sen. Wendy Davis, D-Fort Worth, seems more a matter of 'when' than 'if,' as the Texas Democratic Party launched the 'I Want Wendy' page on their website to encourage her to file.

› The investigation into whether Gov. Rick Perry committed a crime in vetoing the budget for the Travis County Public Integrity Unit may be picking up speed: YNN has reported that Senior Judge Robert Richardson could appoint a special prosecutor as early as next week.

› At long last, and during a speech Monday before the American Bar Association, U.S. Attorney General Eric Holder announced his support for reducing the use of mandatory minimum sentencing in federal drug cases and of drug treatment instead of incarceration for many non-violent and lower-level drug offenders.