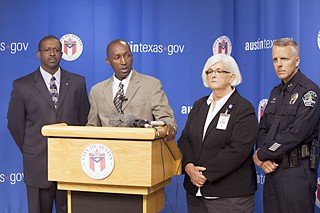 • City Council is back to full-time work this week, with a Tuesday work session and a packed agenda for today's (Aug. 8) meeting, including hearings on the South Lamar Planned Unit Development (aka the "Taco PUD") and the White Lodging/Marriott fee waiver agreement.

› Amid the ongoing police investigations into the July 26 shooting death of Larry Eugene Jack­son Jr., City Manager Marc Ott on Monday said he has asked the Department of Justice to investigate APD's tactics and procedures and to compare those to its policies. Ott said his request does not demonstrate a lack of faith in the department. Meanwhile, APD will change its description of the shooting from "justifiable homicide" to "pending" in a report filed with the state.

› Travis County Commissioners voted 4-1 on Tuesday to provide nearly $1.8 million in funding next year for the Travis County District Attorney's Office Public Integrity Unit. Gov. Rick Perry vetoed $7.5 million in biennial state funding for the PIU, which has statewide jurisdiction in some fraud cases, after D.A. Rosemary Lehmberg, popped for DWI in April, refused to resign her post. Details on Newsdesk, Aug. 6.

› Energy activists are calling on City Council to ramp up Austin Energy's solar goals, just as the utility has requested a 52% reduction in funding solar programs. See www.solaraustin.org for more.

› Austin state Rep. Dawnna Dukes was injured in a car crash Aug. 1, but expects to fully recover. Dukes' car was rear-ended and totaled by a trailer truck as she was stuck in traffic on I-35; the House observed a moment of silence Monday to pray for her recovery.

› The rumor mill about the 2014 plans of Sen. Wendy Davis, D-Fort Worth, spun a little faster this week after she told the national press club "I can say with absolute certainty that I will run for one of two offices, either my state Senate seat or the governor."

› The war between UT-Austin and the UT system regents got hotter this week after UT announced it will not fulfill an open records request by Regent Wallace Hall, who is currently under investigation by lawmakers and may face impeachment. UT Chief Financial Officer Kevin Hegarty cited concerns about how Hall handled documents under previous requests.

› Shama Gamkhar, associate professor of public affairs at the LBJ School, was killed in a plane crash Aug. 4, along with her husband, Sid Shah. Gamkhar, 54, taught public finance and was an expert in environmental economic policy.