No Room for Gays at the Red Room? 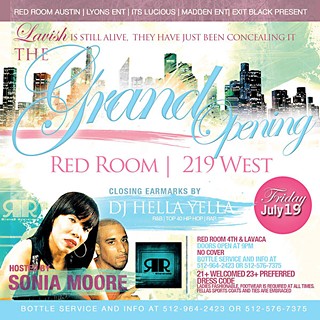 Josh Moon says he knew something was different minutes into his Friday shift. The Red Room on Fourth had been primarily catering to an LGBT clientele, but a popular and flamboyant shot boy had allegedly been sent home at the promoter's request. Later, as Moon was setting up the patio bar, some of his regulars told him that they were being asked to leave. The promoters said they were only enforcing the evening's upscale dress code. Moon says the real reason was that the clients are gay.

As the night progressed, the former bartender says he noticed many of his usual clientele were not being allowed inside the club. "When I walked by the door," Moon says, "I saw that it was only drag queens and gay people that were being turned away for the dress code." The gay customers who were less casually dressed were told that there was a $10 cover charge. Moon says that patrons perceived as being straight were being treated differently. "I watched as their people were let in without a hassle. The promoters let in girls they knew in shorts and flats and [allowed] men in caps that did not follow their supposed dress code. They were not being charged a cover." Disgusted with what he saw, Moon spoke with Red Room management, who allowed him to go home for the evening. The next day, via text message, he was fired.

Lesbian patron Monaco Houston was one of the persons turned away from the door. "I went there on Friday night," Houston says, "As I approached the door, I was rudely asked for my ID. I was then told that I could not come in because I was gay. [They said] 'this is no longer a gay bar and you people are not allowed in here.' I was truly hurt and disturbed by their action." Daniel Tamburello, a cook at the nearby Turf N Surf Po' Boy restaurant, says he was also turned away. "There was a really rude black dude working the door," he explains, "I told him that I was on a change run [and] he proceeded to tell me that this was not a gay bar and that the dress code wouldn't let me in."

That the club, nestled on the corner of Austin's "gayborhood," was no longer catering to the LGBT community came as a shock to clients and staff alike. Moon says that Red Room employees were not made aware of the change prior to Friday night. According to him, management only admitted to no longer being a gay bar after the staff began questioning the door policy. "They said, 'We're not going to call it a gay bar anymore. We're going to call it a straight bar because calling it a gay bar makes people uncomfortable.'" Darrell Yeoman, Vice President of HIV/AIDS nonprofit the United Court of Austin, confirms that the venue was quick to sever LGBT ties. Red Room cancelled one of his organization's planned drag fundraisers at the last moment with a curt explanation that the club was no longer a gay bar.

According to the evening's promoter, that change was the main issue. Chad Lyons, of Lyons Entertainment, says he understood the Red Room owners were looking to rebrand the club, but insists that there was no intention to exclude the regular clientele. "Money is green," he laughs. Lyons says the dress code was advertised in advance. Indeed, the flyer for the event states that female customers are required to wear "fashionable footwear" and encourages male customers to wear a sports coat and tie. Although the event flyer also advertises that the "Grand Opening" would have no cover charge, Lyons claims the charge was decided on later to help defer costs.

Lyons added that he regrets what happened but was not aware of the complaints until Monday night. "I did not see this happening and never gave instruction to anyone to turn people away due to perceived sexual orientation." He believes some of the claims of discrimination may be exaggerated. "I believe this employee [Moon] was disgruntled due to the change of the environment for the evening, because the patrons for the event were not the ones who frequent him on a nightly basis," says Lyons. "The issue was he wanted 'my friends, my regular customers.'"

Lyons maintains that members of the LGBT community did attend both the "Grand Opening" event and Saturday's "Ladies Night." "The only drag queen we turned away was in a bikini top and booty shorts," Lyons says, "but we did let drag queens in Saturday and Friday who were appropriately dressed." He questions why the club owners are not doing more to set the record straight.

At press time, the only word from Red Room has been a brief statement relayed by lawyers to KVUE. The lawyers asserted that the club was booked to a private party who were within their rights to turn anyone away. The statement also insisted that the club owners want Red Room "to remain an open and inviting bar for everyone." Meanwhile the LGBT community – via negative Yelp reviews, social media commentary, and a Facebook group called "Red Room Sit In" – has clearly expressed its doubts.

Note: The owners of the Red Room Lounge at 306 E. Third are in no way affiliated with the Red Room on Fourth.