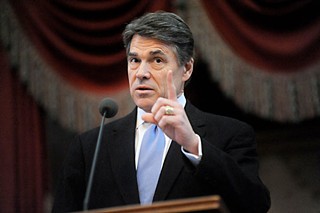 SIX DAY WEEKEND Even though the Legislature is constitutionally obligated to end the special session on July 30 at the latest, the Legislature is taking it easy. The House and Senate both finished out business last week and will not convene until 2pm Thursday, July 25.

TRANSPORTATION FUNDING HEADED FOR A CRASH It looks like the two chambers are in a game of chicken on road finance. Rep. Dawnna Dukes, D-Austin, said that, if neither blinks, "the governor is already threatening a third special session." On July 18, the House passed House Joint Resolution 2: That's a constitutional amendment that, if approved by voters in November, would help fill Texas Department of Transportation coffers. The House plan would end one of the most controversial diversions in Texas financing: using a portion of the gas tax to prop up school finances. However, the Senate received the bill on July 19 and duly gutted it: Without even sending it back to committee, the chamber replaced the House text with what it had previously passed as SJR 1, which diverts a portion of the cash that currently goes to the Rainy Day Fund into the State Highway Fund. Now starts the hard behind-the-scenes fight. There's a general consensus amongst Democrats and conservatives that tax diversions muddle the state's finances. Where they sometimes split is how to balance the books when those diversions are ended. The House version of HJR 2 replaces the gas tax contribution to schools with a portion of the oil and gas severance taxes that would normally go into the Rainy Day Fund. However, Lt. Gov David Dewhurst and Senate Transportation Committee Chair Robert Nichols, R-Jacksonville, argue it would leave a hole in the Rainy Day Fund, and refuse to pass any measure that would not guarantee a $6 billion floor to the fund. They have unexpected allies: Statewide teacher's union Texas AFT opposes the House plan, saying it pits highway funding against investment in schools. However, the House only reached a consensus on its own plan after adding extra oversight to the TxDOT funds: Many lawmakers question the agency's advocacy of for-profit toll roads, while conservative Republicans have been vociferously opposed to its free use of eminent domain. Dukes said, "the position of the majority of the House, especially the more conservative end, is that the Senate rejecting those contingencies is probably a deal breaker." Dewhurst has said he wants a deal between the two chambers within the week, but with only four working days before session's end, his luck may be running out. Moreover, neither measure actually fills the state's potholes: The House plan puts $800 million into roads compared to $900 million from the Senate, but TxDOT calculates it is $4 billion a year behind.

A DAY IN COURT FOR PERRY The allegation that Gov. Rick Perry tried to strong arm Travis County District Attorney Rosemary Lehmberg into quitting after her drunk driving conviction will be heard in San Antonio. On July 22, the case was referred to Senior Judge Robert Richardson of the 379th District Court. The original complaint, written by Texans for Public Justice Director Craig McDonald, stated that Perry "potentially committed one or more criminal offenses" when he threatened to cut funding to the Public Integrity Unit, and then vetoed its budget. TPJ has asked for a series of potential offenses, including coercing a public employee and bribery, be investigated. McDonald originally sent the complaint to Lehmberg's office, which had to recuse itself. Then the complaint went to 390th District Court Judge Julie Kocurek, who also recused herself. Realizing it would be effectively impossible to find a jurist in Travis County who would not have a conflict of interest, the case has been sent to Bexar County.