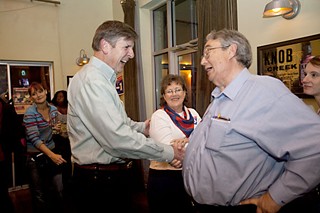 Let history reflect that Peck Young waited until the July 17 meeting of the Inde­pen­dent Citizens Redistricting Com­mis­sion – the 14-member panel charged with drawing new geographic districts for the City Council – to curse during citizens' communication. "That's like, no, you can't have a meeting to get together and agree who you are going to shoot and then shoot 'em. That's criminal. Well, no shit," he said.

Young, a colorful, worn veteran of state and local political wars, is known for his way with sometimes affronting rhetoric. So it can take a bit of parsing to get to the bones of his point. But this time his position was fairly clear: "The idea that the city has that you can only talk once a week, and only when all of you are together is simply an extension of the Open Meetings Act beyond any intention of any of us that were involved at that time," he said.

Young was there as a representative of Austinites for Geographic Representation, the group behind both the charter question and its passage. He was slinging mud at city legal's interpretation of the open meetings law in the wake of complaints in 2010 from local activist Brian Rodgers, and an ongoing lawsuit filed by attorney and former County Judge Bill Aleshire on behalf of journalist Ken Martin. The resulting shutdown of virtually all communication between council offices cast a chill over City Hall (see "Open and Shut," Oct. 26, 2012).

At the center of all this is a poorly phrased question from the ICRC, and two superficially dueling legal interpretations: the one from Aleshire, and one from city legal. It starts with a written query from commissioners: "If a subcommittee of the Commis­sion is formed, is the subcommittee allowed to meet and work on tasks without these meetings being public meetings?" City staff took the question at face value and gave the obvious answer: "No," they wrote, "committees are not allowed to meet and work on tasks outside of a public meeting."

What commissioners were really wondering, though, is whether they can meet in subcommittees at all. Aleshire picked up on this and responded with an equally apparent ruling – at least to those of us who spend our days going to city meetings: The commission "has the authority to create and use 'advisory' committees to support the commission's decision making," he wrote.

And so it was that Young used a letter from none other than Aleshire to back his point about the city's internal counsel.

Such is the state of affairs for a commission charged with completing the already loaded task of drawing council lines for the first time, in what amounts to very short order. Fully convened for the first time July 17, the body still lacked both an executive director and its own, independent legal counsel. A want ad for the former should already be on the street and, as of deadline, the group was set to discuss hiring its own attorney on July 24 – something that freshly annointed Commission Vice Chair TJ Cos­tello suggested would alleviate much of the slogging associated with legal debate.

Indeed, in place of their own counsel, ICRC commissioners have relied thus far on requesting legal opinions of city lawyers and AGR – a fact that leaves the body tethered to both the status quo and a very biased, if well-informed, set of operators. Commissioners have tried to navigate these choppy waters by tacking as far away from the city as is feasible. But the fact that – by design, we should note – commissioners are mostly new to the city process has forced more advice-giving than might otherwise be necessary. And not just on major legal issues.

On July 10, commissioner Rachel Farris asked Young to serve on a subcommittee tasked with finding appropriate venues for the dozen-plus charter-mandated community meetings. It was an honest move considering that, as Farris pointed out, Young had more experience with the requirements of such an outing than anyone else in the room – but a clearly problematic one. Young politely declined.

And so the commission trudges ahead. By calculations of at least one board member, commissioners were already pushing close to what may or may not be a crucial Dec. 1 deadline for completed maps. AGR insists that language in the charter that sets that date as the deadline for commission action before Council members could take over is negated by a move of elections from May to November. Costello suggested that he and his colleagues set Aug. 14 as the date of their first trip out into the wider community. They agreed, despite the fact that they have yet to select a vendor for the mapping software that appears necessary to conduct their business. This, again, could be chalked up to the absence of experienced hands; a problem likely addressed when the group finally hires an executive director and its own legal counsel.

Costello was clear about his intent for the meeting. "The thought process is ... that we have to start somewhere," he said. "August 14 is about a month away. It gives us about four weeks to put an agenda together ... kind of prepare for it; get an idea. Gives us four weeks to get the executive director – maybe [one will] be hired by then. Gives us four weeks to get things done, and it's early enough where we could have this meeting ... it gives us time to brainstorm and debrief and figure out what went right and wrong."

Proponents of the process will argue that this is the messy business of relatively fair democracy. Critics will point to troubles with a novice board planning an impossible mission. Either way, it seems likely that the cursing will continue. 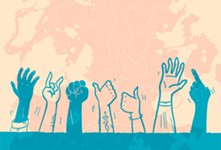