McAfee To Be Remembered at Childhood Home

A celebration of Anne McAfee's life will be held 2pm Saturday at her childhood home – Green Pastures in South Austin, the large Victorian house at 811 W. Live Oak that now operates as a restaurant and event facility. Austin Rep. Donna Howard and former Sen. Gonzalo Barrientos are among the confirmed speakers.

McAfee, 82, died Saturday as a result of complications from a stroke she suffered at the Capitol June 25, where she had joined thousands of others in solidarity against the abortion bill then pending in the Legislature.

Word spread quickly of McAfee's passing. In a statement, Austin Congressman Lloyd Doggett said his friend of 40 years "was full of compassion, courage, and commitment, never giving up on building a more progressive Texas. If she could have chosen a moment to leave this world, it would have been as she was raising her voice for women's rights and social justice." And Tax Asses­sor-Collector Bruce Elfant posted on his Facebook page: "She was an amazing woman who worked her entire life to help achieve a more just society. With Anne's passing we will all have to work a little harder. She would expect no less."

McAfee was active in many political and civic organizations over the years, including her beloved South Austin Democrats, which alerted its members by email: "I am sorry to advise Anne died this morning at 8:30, at home with her family. She was an amazing woman who walked the talk until the end. Anne will be missed."

The longtime women's rights and social justice activist underwent surgery for a blood clot the night she fell ill, and, as she was recovering at Brackenridge Hospital, suffered a heart attack July 2. She returned home July 11 to be with her family as she neared the end of her journey. Early last week a CT scan revealed she had started bleeding internally and her prognosis did not look promising.

"After she'd absorbed the fact that she was in a Catch-22 for which there was no medical solution, she finger-spelled 'Home,'" her daughter, Susan Raybuck wrote last week in an email from her parents' home. "She wanted to be here on her sun porch again, not there in the hospital." A breathing tube prevented her from speaking, Raybuck said, "but she knows the manual sign language alphabet that she'd taught us as kids."

McAfee's husband Bill, their five children, and most of their 12 grandchildren and great-grandchildren were at McAfee's bedside once she returned home on Thursday under hospice care. "We told her how thankful we were for her passionate love for this state and country and for her tireless work to make it a better place, for the legacy she gave us," Raybuck said. "Yesterday she finger-spelled to each of us 'I love you.' Later she spelled out 'How lucky I am.'"

Austin is lucky, too. 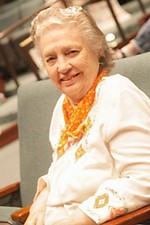 Then There's This: Anne McAfee Stands With Women
Activist recovering after taking ill during historic filibuster