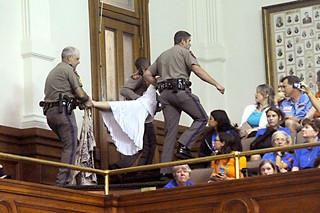 DPS troopers carry, not so delicately, a protester out of the Senate gallery during last week's debate on legislation that further restricts women's ability to obtain abortion procedures. See "The Making of a Movement" for more. (Photo by John Anderson)

› The Texas House is adjourned until 2pm on Thursday, July 18 – a necessary break to find enough votes to pass essential road funding legislation. If they don't do so, lawmakers could be back for a third special session (see "Lege Lines.")

› On Monday, Judge Tim Sulak ruled in favor of the Austin Independent School District in a suit to invalidate the recent school bond election on the grounds of misleading ballot language. The decision allows the district to move forward with issuing the bonds and planning the projects.

› Time to perfect your railslide: On July 17, ESPN announced that the Circuit of the Americas will be the U.S. stop for the summer Global X Games for four years, starting in 2014. Austin beat out Chicago, Detroit, and Charlotte to replace Los Angeles as the host.

› That wet stuff you notice falling from the sky is called "rain"; it's generally harmless, but don't drive through a low spot filled with its residue – with any luck, we'll get much more of it before the week is out.

› Citizens for Responsibility and Ethics in Washington has just released a report on "The Worst Governors in America," and Texas' own Rick Perry made the cut. He's cited for cronyism, influence by lobbyists, and other offenses against ethics – no wonder he wants to run for president again!

› Case in point: San Antonio Judge Robert Rich­ardson has been appointed to consider a Texans for Public Justice complaint alleging that Gov. Perry committed official oppression and bribery by vetoing funding for the Public Integrity Unit in an attempt to force D.A. Rosemary Lehmberg to resign.

› Texas carried out its ninth execution of the year Tuesday, putting to death John Quintanilla for the 2002 murder of retired law enforcement officer Victor Billings. At press time, the state was also set to execute Vaughn Ross, convicted for a 2001 double murder in Lubbock, on July 18.

› Opponents of high stakes testing scored a partial victory as the Texas State Auditor's office issued a report criticizing the Texas Education Agency for a lack of safeguards in its contract with testing behemoth Pearson.

› The leader of the brutal Zetas drug cartel, Miguel Ángel Treviño Morales, was apprehended by Mexican Marines shortly before dawn on Monday morning. He was driving a pickup truck, laden with some $2 million in cash, near Nuevo Laredo.

› On Wednesday afternoon, Mayor Lee Leffing­well and Hexadyne CFO Bruce Lazarus called on local corporations and organizations to match or exceed the $10,000 that Hexadyne is giving to Honor Flight Austin, which flies veterans to D.C. to visit the World War II Memorial.