In the heat of the abortion protests, some say the DPS used excessive force 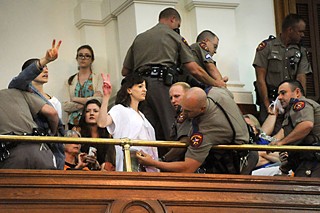 During and immediately following the final Senate debate on House Bill 2 Friday night, Department of Public Safety troopers arrested 12 protesters and injured two outside the Senate. Local activists, many affiliated with a new group – Rise Up Texas/Levanta Texas, which describes itself as a "coalition defending the right of all Texas women to ... healthcare and reproductive options" – had organized protests throughout the day, singing and chanting outside the Senate doors. Toward the end of the night, a sit-in on the second-floor rotunda became a scene of violence that sent two protesters to the hospital.

The first reported arrest of the day occurred around noon, when Carey Neal Dunn was detained while collecting debris from the Capitol rotunda. Later in the evening, nine women – Natalie Atwater, Laura Cauvel, Caitlin Austin, Kirstie McCarty, Jamie Leigh Tilley, Wendy Vastine, Erin Burrows, Joan Ashbrook, and Bianca Hinz-Foley – were dragged from the Senate gallery for disrupting proceedings, and Corey Williams was arrested outside the Capitol while trying to re-enter after having been told not to return earlier in the day. According to witnesses, however, the real confrontation came after the final vote was taken, when Democratic senators left for a press conference, followed by TV cameras. Witnesses say troopers began pulling protesters seated in the hallway to their feet without warning. Protesters were dragged into another room, briefly detained and then released; Yatzel Sabat was arrested. (Ashbrook, Williams, Hinz-Foley, Dunn, and Sabat are currently facing charges ranging from "disrupting a meeting" to "resisting arrest"; the others were released without being charged.)

Videos and pictures of the incidents began circulating on social media almost immediately, including footage of Tilley chaining herself to the gallery railing. The most disturbing images, however, show local activist and self-described "copwatcher" Joshua Pineda lying facedown in a pool of blood. Lindsay Kinsol­ving, a protester unaffiliated with any of the activist groups present, said, "I'd been there almost daily for the past two weeks, and for two weeks I never witnessed anything remotely like this. It was horrifying."

Dave Cortez, an organizer with Occupy Austin and Rise Up/Levanta, described negotiating with troopers throughout the night to ensure that protesters would be given a chance to comply before being arrested. According to Cortez, troopers just outside the Senate door had assured him multiple times that they would receive a warning before troopers began clearing the hallway by force. "He told me it's fine to sit down, but 'when we say clear out, you have to,'" Cortez said.

Despite these assurances, no signal was given before troopers entered the crowd of seated protesters and began dragging them to their feet. In statements corroborated by video footage, witnesses say a group of several dozen troopers came down the stairs from the third floor, convened briefly with the troopers who had been guarding the Senate door, and dove into the crowd without warning.

Kinsolving says she and her boyfriend were among the first seated protesters to be picked up: "My boyfriend was pushed, he fell on top of some girl. An officer was picking up a girl in front of me and kind of lost his balance, and as he fell he kicked my ribcage really hard." And as more troopers poured into the hallway from the rotunda, blocking off one exit route, and others swarmed in the stairwells, some protesters were confused about where they were supposed to go. "Thousands of people were in the Capitol at this point," Kinsolving recalls. "I was under the impression that we were still under lockdown, and many of us thought we literally could not leave [the building] – enter or exit."

Kinsolving pointed to confusion and disagreement among the troopers themselves. "You can see even in the videos troopers seem to be disagreeing. A lot of them were shaking their head. They looked almost apologetic and shameful."

Amid the chaos, cries of "He's bleeding, he's bleeding, be careful with him!" began to echo through the hallway. "He" was Pineda, who lost his cell phone after he leapt to the front of the line. "I got surrounded, and my last thought was, this is about to get old-school, violent. Then there was a flash, and when I came to, I was on my stomach. I realized my face was in blood and started freaking out. I couldn't move my arms and legs. There were cops all around me, and the blood was getting worse."

DPS troopers transported Pineda to Brackenridge Hospital, where he received 10 staples to a wound in the back of his head. Alexis Herrera was also taken to Brackenridge and treated for injuries consistent with Taser use. Herrera said she was Tasered and then dragged away in such a way as to pull her pants partially off, exposing her to the crowd. Neither Pineda nor Herrera was charged with any offense.

Questioned about the events of the day, a DPS representative responded, "Our officers work tirelessly everyday at the Texas Capitol to provide a safe environment, ensure the safety and security of visitors and state officials alike, and preserve the integrity of the proceedings." The DPS may eventually face lawsuits for use of excessive force.

Kinsolving expressed her dismay over the escalation, calling it "unwarranted and unnecessary." No matter what side you're on, that was a horrible thing to have happened," she says. "I'm really ashamed for my city that I saw that happen."