Then There's This: A Farr Vision For Colony Park

Chosen consultant vows to 'plan with the whole person in mind' 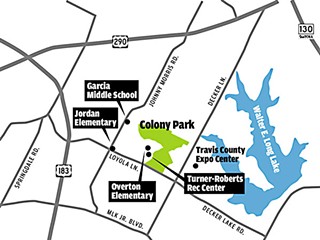 Northeast Austin's Colony Park community is due for a sustainable makeover.

"I don't need six minutes to ask for what I want," Barbara Scott told City Council last month as she boiled down her testimony in about the time it takes to brush your teeth.

The president of the Colony Park Neighborhood Association had been allotted six minutes to try to convince Council to reject the staff's recommendation to award a $2 million contract to one of two short-listed firms vying to create a master plan for the Northeast Austin community. One by one, Scott and other neighborhood residents laid out concise, persuasive arguments why Council should instead tap Chicago-based Farr Associates – staff's second choice.

It turned out Council needed little convincing – and little discussion – before voting unanimously June 25 to put its money on the Farr firm and its local partner Urban Design Group to create a vision for a sustainable, affordable mixed-use development on 208 acres of raw, city-owned land. City contract management staff had relied on a matrix system to arrive at its recommendation of Austin-based McCann Adams Studio, which, as some council members judiciously acknowledged, has built an impressive folio of work on several high-profile developments, including projects within the overall Mueller neighborhood plan.

But the primary stakeholders in this process – the neighborhood residents – wanted a fresh start with Farr, not a firm that they worried might try to turn Colony Park into a mini-replica of Mueller – "rooftops with no infrastructure," as Scott put it.

The two firms had met over time with Colony Park residents, and then pitched their respective proposals to Council June 20 in 15-minute presentations.

The Farr group proved a better sales team, plus the Chicago firm had the advantage of having worked with people in disenfranchised communities on projects that went on to win national awards. City leaders also want to turn Colony Park into an award-winning, can-do model for other cities. And judging from residents' testimony, Farr had done a better job of connecting and establishing a relationship with a neighborhood of predominantly African-American and Hispanic residents with modest to low incomes. Thirty years ago, Scott told Council, Colony Park had no vision and no hope, but the Farr team "gave us hope with a vision."

Ten years ago the vision seemed little more than a glimmer in the city's eye when it purchased the property – a total of 258 acres – and set aside 50 acres as dedicated parkland, with the remaining land to be developed with a focus on affordability. The plan didn't start gaining serious momentum until late 2011, when the city was awarded a $3 million "community challenge" grant from the U.S. Department of Housing and Urban Development.

Located in Austin's rather isolated northeast fringe, Colony Park had, over the years, acquired the profile of a distant relative. Even though the city annexed the neighborhood in 1973, residents have no easy access to grocery stores or public transportation. Connectivity is absent: the neighborhoods are physically disconnected from one another, including two nearby schools. The one good thing to come along in recent years – the Turner Roberts Recreation Center – had to close not long after it opened because of structural damage caused by shifting soil. The visual impact of its ongoing reconstruction serves as a valuable reminder of the tricky topographical constraints in developing a master-planned community that blends affordability with ecological and environmental sustainability. Colony Park was once a thriving neighborhood, home to many families of military officers and personnel at the former air force base now known as Austin Bergstrom International Airport. Once the air base folded, the neighborhood began its slow decline as crime picked up and neighborhood kids dropped out of school.

One Colony NA member, Margarita Decierdo, provided some grim neighborhood facts for Council: In 2011, 41% of 18-to-24-year-olds had not completed high school, and 56% of young people aged 24-and-under living in below-poverty-level households were Latino. "Public transportation is almost nonexistent, there are no grocery stores within walking distance, squalor can be seen by the dumping of trash ... and the list goes on." Decierdo said when she asked the Farr team how they intended to turn around Colony Park, their response was simple: "planning with the whole person in mind."

In his presentation, the firm's founding principal, Douglas Farr, cautioned Council on the challenges ahead. "The easy part is drawing the plan. The hard part, especially at Colony Park, may be getting it done." Citing the firm's previous multiyear projects, Farr said, "They needed sustained leadership that spanned mayoral terms, council terms, and volunteer activities [of stakeholders]." The projects would not have happened otherwise, he said. Recalling one regrettable experience, he said one project got caught up in Tea Party politics, creating all sorts of difficulties but offering lessons for future projects.

Farr assured Council his team has a strategy for dealing with the unexpected: "Resilience – the idea that you want to be ready to handle the things you can't see coming down the pipeline." 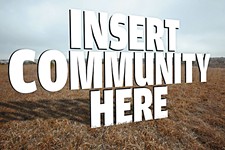