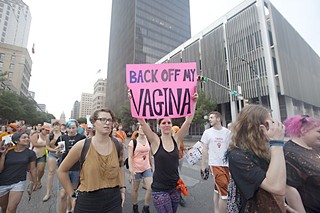 In a lengthy session Tuesday, GOP House members rejected all proposed amendments to House Bill 2, Rep. Jodie Laub­en­berg's sweeping abortion regulations bill. Laubenberg, R-Parker, said repeatedly during more than 10 hours of debate on the House floor that her bill is "carefully written" and quickly moved to table any changes or additions to the text. The measure got a final nod of approval, 96-49, on third reading Wednesday morning.

The bill would ban all abortions after 20 weeks (based on the scientifically unconfirmed assertion that a fetus feels pain at that point), require all abortion clinics to become ambulatory surgical centers (ASCs), require doctors to have hospital admitting privileges within 30 miles of each facility where they perform abortions, and mandate the manner in which medical abortions can be administered.

Democratic lawmakers (and at least one Republican) believe that the bill, as written, is unconstitutional and will not withstand court challenge. A series of lawmakers offered amendments that they believe would cure the bill of its defects or at least mitigate its worst effects. Reps. Sarah Davis, R-West University Place, and Sen­fron­ia Thompson, D-Houston, each offered an amendment that would create an exception to the 20-week rule for victims of rape and incest. "You're getting ready to pass legislation that is unconstitutional," Davis (the only Republican standing against the bill) told her colleagues. "I believe in and care about the rights of women and the rights of the unborn, and protecting them within the confines of the Constitution."

Thompson took the front lectern with a golden and bejeweled coat hanger pin attached to her jacket, and bearing a wire coat hanger, a knitting needle, a feather, and a bottle of turpentine, all home-abortion remedies that she says will be used if the bill passes as written. The House voted to table (i.e., reject) both amendments – as it did with all 26 of the amendments offered during more than 10 hours of floor debate (see the full list with this story online).

Rep. Rafael Anchia, D-Dallas, offered an amendment that would clarify that doctors have discretion to decide when a woman's life is in jeopardy, allowing an exception to the 20-week ban. Not necessary, said Laubenberg.

Laubenberg also opposed an amendment from Rep. Donna Howard, D-Austin, that would have made the standards for abortion-providing doctors the same as those who perform other procedures at ASCs. Abortion is a "very different kind of procedure – much different than having your tonsils out," Laubenberg replied. It's the "only procedure that when it's done a life has been taken."

Amendments to require comprehensive sex education, to excise all but the 20-week ban, to reimburse women for travel expenses should they have to travel far for health care because of local clinic closures – all were rejected. Yet Anchia, Davis, and others argued that to leave the bill as currently written is to seal its fate as legally unenforceable. "The way this bill is drafted is flawed," Anchia told Laubenberg. "It will not survive constitutional muster."

Indeed, similar laws across the country have been blocked, including in Wisconsin where a court ruled Monday to restrain enforcement of a law that would require abortion-performing doctors to have hospital admitting privileges – as Laubenberg's bill does.

As currently written, HB 2 is likely to result in the closure of all but five of the state's 42 abortion-providing facilities. If that happens, the distances between the remaining providers would become extreme – in committee testimony last week, for example, a UT researcher noted that women in El Paso would have to travel more than 1,000 miles round-trip for services should the bill pass.

A day before the House debate, on Mon­day, July 8, a long line of people waiting to register an opinion on Senate Bill 1, the Senate companion to Laubenberg's measure, snaked throughout the Capitol Exten­sion. By 9am, 11 overflow rooms had been set up for those wanting to watch the hearing, playing out in the Senate Finance Com­mittee room at the rear of the Exten­sion. In all, nearly 3,900 people registered an opinion on the bill – including 2,076 who signed up in opposition to the measure; 357 people testified during the marathon (roughly 16-hour) hearing, mostly in opposition.

As that hearing got under way, Sen. Robert Deuell, R-Greenville, committee vice chair, laid two pairs of small shoes on the dais – one pink and one blue pair of tennis shoes – as a reminder, he said, of the millions of aborted children who will never be able to testify at this kind of a hearing – or to run for political office. That angered several witnesses who testified against the measure – one witness left behind a pair of women's sandals to represent women who died from illegal abortions pre-Roe v. Wade; another noted that Deuell's little shoes could certainly be put to use to shod poor children who are here already.

Like Laubenberg, SB 1 author Sen. Glenn Hegar, R-Katy, has said he declines to amend his measure, including to strengthen protections for the life and health of the mother or for victims of rape and incest.

Despite the authors' protestations that the measure is needed to "protect" women and unborn children, opponents see the bill as a calculated political tactic to bolster support among the far-right conservative GOP base by lame duck Gov. Rick Perry. "We are here because someone in this building – not in this room, in this building – finds it politically expedient to have us locked in here for two sessions ... because they want to run for higher office. That's why we're here," Rep. Roland Gutierrez, D-San Anton­io, told his colleagues. "I have three numbers for the folks standing up in blue and orange [bill supporters and opponents, in the room]: $30,000 a day it's costing you, the taxpayers, to have us in here; 10 states in this union ... have ruled on this issue. Through the federal appellate court system, this issue has been overturned ... such legislation has been enjoined and there have been findings of unconstitutionality. The last number I will tell you is 40 years of well-settled law ... you're asking us to overturn."

With the House's final vote in favor of the measure, the bill moves to the Senate for its consideration.