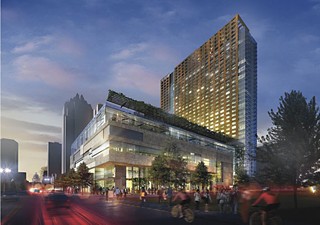 A rendering of the JW Marriott Hotel

Council Member Bill Spelman's trip to a National League of Cities event in Wash­ing­ton, D.C., last week could not have been more perfectly timed – at least not for his colleagues. Faced with a political thicket of issues that have, since January, threatened to overwhelm a deal that extended $3.8 million in fee waivers for construction of a new JW Marriott Hotel at Second and Con­gress, in exchange for a promise to pay construction workers "prevailing wages," Mayor Lee Leffingwell took the opportunity of Spel­man's absence to punt the issue to the next Council meeting – all the way to August 8.

Punted or not, it still looks like Council members will have to make the final determination in a case they thought they'd settled two years ago. A quick refresher: In June 2011, Council approved a deal with Indiana-based White Lodging Services Corp­oration for the construction of a huge new Downtown convention center hotel, a project coveted by city leaders. In exchange for the fee waivers, White Lodging agreed to a set of conditions, including, for the first time, an agreement to pay prevailing wages to the project's construction workers.

But White Lodging soon began to argue that there was some fuzziness about what, exactly, the city meant by "prevailing wages," though the common definition is the current regional standard for similar work, and the city maintains that standard on its own projects. But when the bean counters at White Lodging calculated how much prevailing wage would cost, they balked, arguing that paying prevailing wages for the project would run well past the nearly $4 million in fee waivers they'd be collecting from the city – although the notion of a presumed equivalence was never part of the agreement. Former Assistant City Manager Rudy Garza further complicated matters when – unilaterally it appears – he told the firm that they could "average" construction workers' earnings to reach prevailing-wage numbers (see "Then There's This: White Lodging's Steal of a Deal," June 14), instead of actually paying every worker the prevailing wage. Labor groups got wind of the mess – and of underpaid workers – and started filing complaints. City staff reviewed the project's pay records, and on June 14, Assistant City Manager Anthony Snipes revoked the fee waivers.

Then, City Manager Marc Ott stepped in. On June 20, Ott issued a memo that placed the issue uncomfortably back in Council's lap, proposing four options, ranging from enforcing the deal as written to some compromise with a "living-wage" floor and reduced waivers.

Last week, Council members were set to consider what they really meant when they said "prevailing wage." But with Spelman set for an afternoon departure, and White Lodging asking for a full Council to hear the matter, Leffingwell proposed a postponement until after Council's annual July summer break, and Council agreed.

Meanwhile, a new piece of the timeline emerged, in the form of a letter from Dep­uty City Manager Michael McDonald to White Lodging honcho Deno Yiankes. The letter, dated Jan. 11, 2013, appears to lay responsibility for the confusion directly on Garza. "It has come to my attention that White Lodging Services Corporation may not be in compliance with the City Council ordinance ... concerning fee waivers related to the development of the hotel being built in Downtown Austin," McDonald writes. "If this is the case, the situation must be remedied immediately. ... I recently learned of a letter you sent to former Assistant City Manager Rudy Garza on August 10, 2011 regarding 'Prevailing Wage Targets for Construction of Marriott Marquis Con­ven­tion Hotel.' In that letter, you seem to indicate that you are modifying the specific requirements of the city ordinance by adhering to an average wage rate payment plan. The letter has a handwritten 'OK' with a signature that appears to be Rudy Garza's and a date of 8/16/11. Please note that the letter has no effect on the requirements dictated in the ordinance. Only the City Coun­cil can take action to modify an ordinance."

Thus, in the person of McDonald, city management seemed to be clear about Council's intent.

Mayor Pro Tem Sheryl Cole laid out the situation in terms that only suggest the frustration simmering at City Hall. "We have to give people the confidence that when somebody speaks for the city, they speak for the city," she offered, but then added, "We have to have confidence that when we [Council members] make decisions they are carried through." But White Lodging continues to point to Garza's letter as ratifying its subsequent payroll practice, and argues that Council shouldn't renege on that understanding.

McDonald's letter and Snipes' memo had initially appeared to settle the matter and relieve pressure on Council to intervene; Ott's memo reversed course and sent the fiasco back to the dais – with the risk of litigation unspoken, but real.

Leffingwell praised the hotel project and called all four of Ott's options potentially "valid and viable," and said he looks forward to the August discussion. Aside from Kathie Tovo and Laura Morrison, who voted against the fee waivers in the first place, he may be the only Council member to feel that way.