Then There's This: Anne McAfee Stands With Women 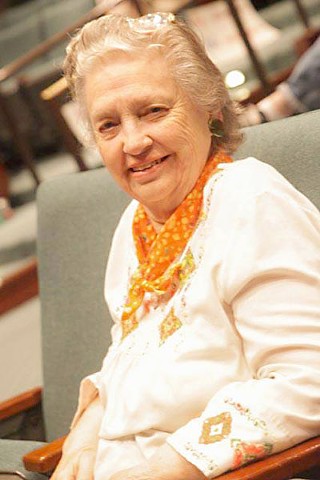 Anne McAfee, at the Capitol on June 25 (Photo courtesy of David Thomas Photography)

Eighty-two-year-old Anne McAfee missed the big Stand With Texas Women rally at the Cap­itol on Monday. Had it not been for the stroke she suffered last week, which came on just as Sen. Wendy Davis was approaching her 10th hour of filibustering an abortion bill, you can bet McAfee would have been back at the Capitol on Monday, wearing opposition orange. She would have arrived early and stayed until the crowds dispersed. Afterward, she would have returned home, likely to make phone calls or send emails, reporting on the events of the day as the Legislature gaveled in its second special session.

"Every time there was a protest, Anne was there," said friend Walter Timberlake, who has known McAfee since the late Forties. The two were part of the old crowd active in Democratic politics and labor issues. "Wheth­er she was for it or against it, if there was a protest, she was there. She was always on the go and could go all day long. She'd wear her husband [Bill] out."

Democratic regular Leslie Pool saw McAfee the night of the filibuster as she and Ann Kitchen were making the rounds at the Capitol. "She looked happy and engaged, if a bit tired. And she was wearing orange," Pool said.

McAfee had every intention of going all day long when she showed up at the Capitol last week for Davis' filibuster of Senate Bill 5. But she took ill around 9pm. Those around her came to her aid and stayed with her until paramedics arrived and rushed her to Brackenridge Hospital, just a minute or two away by ambulance, where she underwent surgery to remove a blood clot.

She missed the dramatic finish that killed the bill, which instantaneously resuscitated the state Democratic Party and made Davis an overnight political sensation. It was the moment that McAfee had been waiting to witness since George W. Bush trounced Ann Richards in 1994, effectively derailing the Democratic party. McAfee was still groggy from surgery when family members cheerfully told her that SB 5 had failed and that the Supreme Court had overturned the Defense of Marriage Act. McAfee's husband and five children were relieved the stroke hadn't wiped out her memory of what was what in the political world.

By the start of this week, Brack doctors had declared McAfee ready to begin intensive therapy at St. David's Rehabilitation Hospital. She was scheduled to be transferred there Tuesday but a setback that morning put her back in ICU at Brack. Susan Raybuck, the eldest of Anne and Bill McAfee's five children, reports that when her mother is well enough to begin therapy, she'll need help regaining her balance, dexterity, and pronunciation. "Memory has also been affected to some degree (we aren't sure how much)," she wrote in an email, "but she seems to remember the most important things: family members, relationships, and political activism."

The niece of famed humorist and radio and television entertainer John Henry Faulk (Austin's Central Library is named in his honor), McAfee grew up at Green Pastures – the Faulk family homestead on Live Oak Street in South Austin, which today operates as a restaurant. The large Victorian home, built in the late 1800s, served as home for generations of the Faulk family. Like her mother, Martha, Anne grew up at Green Pastures, on what was then a 23-acre farm. Martha and John Henry's father, Judge Henry J. Faulk, was a civil rights activist. McAfee grew up milking cows – a job that was ordinarily handled by the Faulk males, but they had gone off to fight in World War II, so the girls and women worked the farm and ran the household.

Timberlake, a longtime union activist, says he and McAfee enjoy swapping stories about their childhood and old battles won and lost, either at the ballot box, the Lege, or City Hall. He says they usually root for the same candidate, normally the one with backing from labor groups. "Sometimes she doesn't go along with them, though. It depends on who's running, but Anne has almost always favored the female running for the office – except in the district attorney's race. She went with Charlie Baird," he said. "Charlie's a good man, but I went with Rosemary [Lehmberg], so we were split there."

In a fundraising letter she wrote last year on behalf of Paul Sadler, 2012 Democratic candidate for U.S. Senate, McAfee included a little background about herself. (The letter is posted on the Travis County Democratic Party website.) "I got hooked on politics as a 13-year-old volunteer in the 1944 Minnie Fisher Cunningham campaign for Governor – 25 years earlier, she had been president of the Texas Women's Suffrage Association. I'm proud that Texas got the vote for women two years before they got it nationally," she wrote.

Monday at the Capitol, McAfee would have seen several women dressed as suffragettes, illustrating the pro-choice argument that the male-dominated Republican Party wants to turn back the clock on women's rights by restricting their access to reproductive health care. It's very likely that McAfee would have registered to testify in opposition to House Bill 2 (SB 1 in the Senate) – the revived abortion bill that at press time Tuesday was being heard by the House State Affairs Committee. She would have arrived early and stayed late.

Friends can email short messages to Anne McAfee at AMcAfee@austin.rr.com. 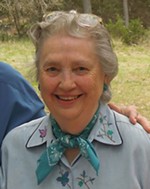