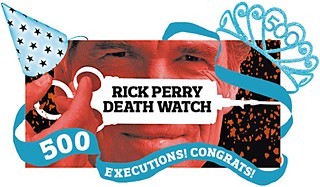 With the execution of Kimberly McCarthy slated for June 26, Texas is on the eve of a historic first: The first state to have executed 500 individuals since reinstatement of the death penalty – an event that also extends Gov. Rick Perry's record as the U.S. governor presiding over the most executions ever carried out. McCarthy is slated not only to be tagged with the infamous fate of 500, but will also become only the fifth woman – and the third black woman – executed in Texas since 1854.

McCarthy, who was previously married to New Black Panther Party founder Aaron Michaels, was sentenced to die for the 1997 robbery-murder of her 71-year-old neighbor, retired professor Dorothy Booth. Accord­ing to the state, McCarthy's crack cocaine addiction led her to employ a ruse – she needed to borrow sugar, she told Booth – in order to get into Booth's house. Booth was repeatedly stabbed, and her finger, with ring on it, was cut off. Booth's car and credit cards were also stolen; McCarthy told police she pawned the items to get money for drugs.

McCarthy was first slated to be executed in January, but that date with death was halted by a Dallas County judge in order to consider a claim that minority potential jurors were improperly struck by prosecutors from serving in McCarthy's trial (it was actually her second trial; her initial 1998 conviction was overturned after the courts found that the state improperly included into evidence a statement McCarthy made to police after she had "unambiguously" invoked her right to counsel). In a letter to Dallas County District Attorney Craig Wat­kins, McCarthy's attorney Maurie Levin pointed out that at the time of McCarthy's trial racial discrimination "pervaded" the county's jury selection process. Levin also noted that Watkins had told The Dallas Morning News that he would advocate during the recently concluded 83rd Legislature for passage of the Texas Racial Justice Act, which would allow death row inmates to appeal based on claims that racism played a role in their conviction.

McCarthy's execution was postponed until April 3 and then again, to June 26, on Watkins' request, in order to afford the Legislature time to consider whether to pass a racial justice law – either Dallas Sen. Royce West's Senate Bill 1270 or Houston Rep. Senfronia Thompson's House Bill 2458. Neither bill was successful. Thomp­son's bill received a hearing in the House Criminal Jurisprudence Committee, but was not called up for a vote; West's measure wasn't even given a hearing. Those bills were fashioned after the landmark Racial Justice Act passed by North Carolina; in early June, the Republican-led legislature there repealed the RJA.