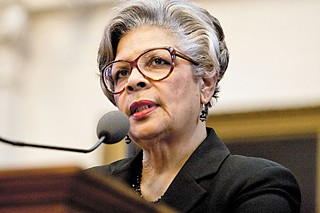 Seven minutes. That's how long the June 18 meeting of the House Redistricting Committee took to vote out House, Senate, and Congressional redistricting maps.

The Republicans on the committee did the bidding of Gov. Rick Perry, who had called the session to adopt the interim maps drawn by the San Antonio courts in 2011 (see "There They Go ... Here They Come Again," May 31.) As a result, the committee split 11-5 on party lines on two of the maps: the House maps in Senate Bill 3, and the Con­gres­sional boundaries in SB 4. There was more agreement on SB 2, the court-drawn state Senate maps, which passed 15-1.

The committee had met with less unanimity the day before to discuss the identical House-written counterpart bills. Both committee Vice Chair Yvonne Davis, D-Dallas, and Rep. Trey Martinez Fischer, D-San Antonio, offered substantive amendments to the state rep maps in HB 3, to no avail. However, Committee Chairman Drew Darby called the final vote when only 14 members of the committee were present. As it only passed 9-5, and not with the 10 votes required to move forward, HB 3 died.

So the committee reconvened June 18 for a second try, this time moving forward with the Senate versions. However, Rep. Senfron­ia Thompson, D-Houston, raised a point of order on SB 3, highlighting what she saw as an attempt by Rep. Darby to end-run the parliamentary process. Thompson argued that the Legislature's rules about mirroring the substance of one bill in another meant the failure of HB 3 and should have scuppered the identical Senate plan. "If a bill fails in committee," Thompson said, "then it is a bill that is dead and the subject matter is not to be duplicated in other bills." Yet Darby overruled her, and now all three maps head to the House, where they are expected to face a vote today, Thursday, June 20.

That's the same day the U.S. Supreme Court is expected to rule in Shelby v. Hold­er, a case that could determine the future of Section 5 of the Voting Rights Act. The fate of that legislation, which requires states including Texas to have electoral maps precleared by the U.S. Department of Justice, could be a key determinant of the nature of any future legal challenges. But however that decision goes, it seems highly likely that the maps passed this week will see more days in court: Even the judges who originally drew them called them imperfect.