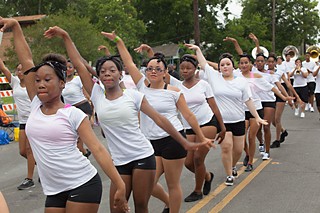 Members of the Austin All-Star Marching Band entertain the crowd along the streets during the Juneteenth Parade in East Austin on June 15. (Photo by Jana Birchum)

› City Council meets today (June 20), facing at least a couple of likely flashpoints: a public hearing on revised helicopter/helipad regulations, and a hearing on the proposed South Lamar PUD. See "Council Preview: What Can We Afford?"

› Going underground? On June 18 Council started early feasibility discussions about a 'cut and cap' project for I-35, making the highway a tunnel between 15th and Cesar Chavez. Architect Sinclair Black argues the $550 million scheme would finally unify Downtown and East Austin.

› The annual Republic of Texas Biker Rally rumbled into town last weekend. The Austin Police Department made 50 no-refusal drunken driving arrests and Austin-Travis County EMS units responded to 21 biker-related accidents during the four-day fest. EMS reported just one on-scene death, when a woman riding on the back of a motorcycle was thrown against a guardrail during an accident.

› The Texas Civil Rights Project has sued Williamson County Commissioners on constitutional grounds, on behalf of a Burnet County deputy who was questioned about his views on politics, religion, abortion, and gay rights in an interview for a constable position.

› The U.S. Supreme Court is expected to issue rulings on two cases with major implications for Texas on June 20: Fisher v. University of Texas, challenging UT's admissions policies, and Shelby County v. Holder, on the preclearance clause in Section 5 of the Voting Rights Act.

› The city has a new format for utility bills that lets customers make voluntary contributions to one or more of three categories: Customer Assist­ance Program, providing emergency aid for struggling ratepayers; Parks and Libraries (donations to be divided between the two), and Public School Energy Assist­ance program. Gone is the tree-planting fund option.

› The U.S. Supreme Court ruled Monday that a suspect who remains silent during questioning by police without being placed in custody or without invoking their right to silence may have that silence used against them as an indication of guilt. That's what happened when Genovevo Salinas didn't claim his right against self-incrimination when being questioned about a Hous­ton murder, but simply decided not to answer questions about a shotgun believed to be the murder weapon. A prosecutor later used that silence as an indication the murder weapon was Salinas'.