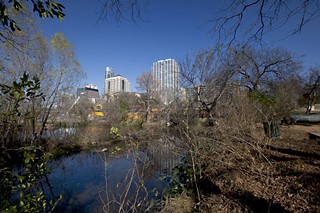 That buzzing you hear may be the sound of looming helicopters; not the black variety of survivalist nightmares, but the more mundane variety charged with transporting big-shots across town – say, on their way to the next round of Formula One races – subject of one of the public hearings at City Council today, June 20. After a series of stakeholder meetings, city staff has drafted a new set of regs (Items 88-89) designed to make 'copters less intrusive on neighborhoods – 31 pages of limits on location, frequency, noise, etc. Whether that will be enough to quiet the buzz of opposition, we'll soon discover.

Somewhat higher on the agenda (Item 15, on consent), and less likely to evoke opposition, is another potential tweaking of the new parental leave policy enacted at Council's last meeting. At Tuesday's work session, members explored whether the city can afford to expand the policy beyond its fairly limited definition (to employees not governed by contract) and restrictive time frame (as currently designed, staffers would have to exhaust all other accrued leave before using the paid parental benefit).

Likely to cost a good deal more, at least in the long run, is the formal approval of the Waller Creek Project and its design plan, previewed again for Council during its last meeting. Items 21 and 23 would authorize the city manager to negotiate a joint development agreement with the Waller Creek Conservancy, and endorsed the elaborate Michael Van Valkenburgh Associates/Thomas Phifer design briefed on June 6.

The broader question of affordability is always in the air (this week's work session featured yet another briefing on various ways the city is trying to promote affordable housing), and today's morning briefings will certainly touch on it: 1) a review of the sustainability aspects of the Colony Park Project in Northeast Austin, and 2) an update on the Downtown Plan Density Bonus Program – the persistently embattled attempt to tie developer zoning changes to provision of affordable units. One concrete instance of the debate will be the return of the "Taco PUD" – the proposed upscale planned unit development for 211 S. Lamar (currently the site of a Taco Cabana). There's considerable opposition from neighbors and from city boards, with "affordability" a simmering issue – but the rezoning has been recommended by staff and by the Planning Com­mission, often a trump card at Council (see "Taco Tower ... Project on Council's Plate,"). Expect a spirited hearing.

Beyond this summation, there are resolutions from Council on transporting hazardous waste around the city (Item 55; SH 130 never looked so good) and another to join the process currently exploring a "cut and cap" below-ground reconstruction of I-35 through Downtown – someday you (or your offspring) might be able to cross the freeway on foot without drafting a new will.

The band of the day is Latin fusionists Este Vato; proclamations include World Refu­gee Day, Love Your Rescue Pet Day, and Wal-Mart – for its Charitable Giving and Hunger Relief programs. Next step: persuad­ing Wal-Mart to pay its employees sufficiently so that they do not require charitable giving and hunger relief programs.