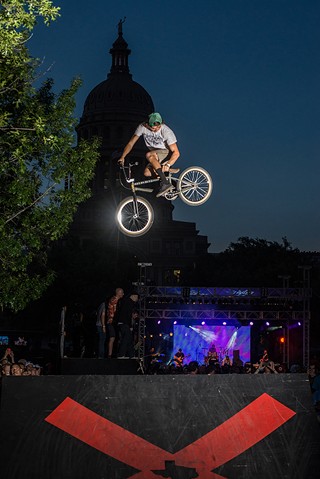 BMX Pro Clint Reynolds roasts a seat grab during the 2014 X games rally June 5 outside the state Capitol. Austin is in the running to host next year's event. (Photo by Sandy Carson)

› No City Council meeting this week, but the draft agenda for June 20 features a briefing on the contentious Downtown Density Bonus Program, a return of the South Lamar PUD, and a public hearing on heliports. Be ready to duck.

› The Texas Civil Rights Project filed a federal lawsuit Monday against the city of Austin, the Austin Police Department, and several officers, charging that officers forced a cab driver to transport a drunk and belligerent passenger who then attacked and injured the driver.

› A proposed new contract between the city and the Austin Police Association would allow public release of Citizen Review Panel recommendations on discipline made in cases involving critical incidents, regardless of whether the chief metes out any discipline. It also allows the police department to hire retired officers in good standing to augment the police force during special events – including SXSW and the Formula One race weekend. The police union is currently voting on whether to approve the contract; for more, see the Newsdesk blog, June 10.

› Visiting Judge David Peeples, appointed to preside over County Attorney David Escamilla's suit that seeks to oust Travis County District Attorney Rosemary Lehmberg from office, gave the nod for a second removal suit, filed by onetime D.A. candidate Rick Reed, to move forward. Escamil­la would be tasked with representing the state in either, or both, matters, but isn't required to accept the new charges. Nonetheless, his office is working toward a July 22 trial date set by Peeples.

› In other Lehmberg news this week, Gov. Perry threatened to withhold funding from the Public Integrity Unit unless she resigns, and a website called So Long, Rose accused her of being involved in a hit-and-run collision the night she was arrested. The Travis County Sheriff's Office says that 911 call transcripts prove Lehmberg wasn't involved in the incident in question.

› The Texas Education Agency has released preliminary scores on the new STAAR tests, showing little movement statewide. For all the bleating from lawmakers and the business community that the state must put more emphasis on science and math, passing rates remain lowest in writing.

› A three-judge panel Wednesday refused to halt the execution of Elroy Chester in a review ordered by 5th U.S. Circuit Court Chief Judge Carl Stewart in response to a complaint filed against Judge Edith Jones. Chester's appeal, claiming that his intellectual disability should constitutionally exempt him from execution, was denied last year by Jones, now being investigated for alleged remarks she made at a February lecture. At press time, Chester's execution was set to be carried out late on June 12, barring acceptance of a last-minute appeal to the U.S. Supreme Court. (See "Judge Edith Jones on Race, Crime, and God's Vengeance," June 7.)