Champions of Breakfast for Kids 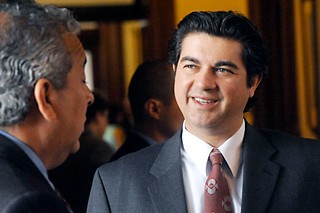 Rep. Eddie Rodriguez simmered the bill in the House. (Photo by John Anderson)

Among Austin's growing foodie culture, Austin Democrat Rep. Eddie Rodriguez is growing a bountiful reputation as a supporter of small producers through his work with the Texas Farm-to-Table Caucus. However, his biggest nutritional victory will put breakfast on the table for hundreds of thousands of kids around the state.

On May 24, Gov. Rick Perry signed Senate Bill 376 into law. Under the new rule, campuses with more than 80% of their students eligible for free or reduced meals must now also provide free breakfasts. While some districts such as Houston ISD already provide breakfasts, this measure will help feed another 700,000 kids.

The measure was cooked on both sides of the dome: Sen. Eddie Lucio, Jr., D-Brownsville, prepared it in the upper chamber while bill sponsor Rodriguez started the pot simmering in the House. The two have worked together before on school nutrition bills. In 2011, they served up SB 89, expanding the number of poor and hungry kids eligible for the Summer Food Program. But when it came to the breakfast bill, "it's not my first session working on that particular legislation," said Rodriguez. "It's my second and probably Senator Lucio's third bill trying that out." In 2011, neither lawmaker's proposal made it out of committee. That made this year's victory all the sweeter, Rod­riguez said, "just because I didn't expect it to pass. We had a more conservative batch of Republicans, but I worked the floor really hard." He was able to make the argument to many Republicans that, since the proposal simply leveraged existing federal dollars, it would not cost the state the price of a penny candy.

The bill comes with the support of an extremely diverse coalition, from education groups like the Texas Association of School Admini­strat­ors, to commercial bodies such as the Texas Association of Dairymen, to charities, including Children at Risk. Jason Sabo of Frontera Strategy said, "this wasn't a hungry kids issue. It was a farmers' group issue. It was a business group issue. It was an academic performance issue." He credited Rodriguez for gathering support well before the current session started, and said the bill proves that, even in conservative Texas, child advocates can score legislative wins if they pick their battles wisely and reach out beyond their traditional allies. He said, "there aren't going to be many bills that are considered a progressive victory this session, but this is one."