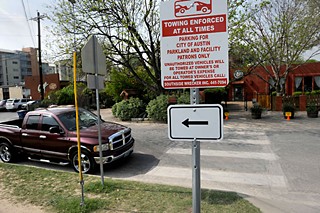 A sign along Toomey Road warns that parking is for park patrons only, but Council will consider a controversial proposal to allow businesses – such as parking-strapped Casa de Luz in the background – to use parking facilities at city parks. (Photo by John Anderson)

An attempt to save Casa de Luz from its seemingly interminable parking woes was deflated at the Planning Commission last week.

If approved by the City Council next month, the proposed code amendment that was being discussed would allow city businesses to take advantage of underutilized public parking on city park land, in order to meet code requirements.

The plan is directly related to ongoing parking problems at Casa de Luz, an iconic macrobiotic restaurant with a staunchly loyal following. Council Member Chris Riley brought forward the proposal last December hoping to create a means for businesses in need to lease parking spaces that are managed by the city's Parks and Recreation Department. In turn, the businesses would contribute fees or amenities to help improve and maintain those parks.

At the time, Riley explained that the purpose of the ordinance would be to create a mechanism to approve parking in exchange for park improvements under very specific conditions, which seemed more attractive than the current options.

"Using the mechanisms we have right now, the appropriate response to that would be to go in, ticket all of those cars that are there, and, if we are really on our toes about enforcing city rules and regulations, the city would proceed to shut down Casa de Luz. So you would have a park that continues to be in rather shoddy condition, you would have an empty surface parking lot, and you would have a shuttered business," said Riley.

It was hardly a secret that the provision was an attempt to resolve the parking situation at the Toomey Road business. For years the macrobiotic restaurant has used the south parking lot of Butler Shores Park to provide parking for its patrons, an arrangement that is one-sided and illegal. Riley's proposal was an attempt to make a version of that arrangement legal, allowing the use of an underutilized lot to keep a beloved business open while raising money for a park that could use it.

In short, it was supposed to be a win-win situation. Why, then, when it finally came to the Planning Commission, did it receive a unanimous thumbs down?

For a start, the city's legal department, as well as common sense, won't allow the city to change its rules for a single business on Toomey Road, west of South Lamar, between Lady Bird Lake and Barton Springs Road. And, as it turns out, changing the code to accommodate Casa means that 3,200 other private businesses would have an equal claim to parking in city parks.

That number, as noted by a Jan. 16 memo from Parks and Recreation Director Sara Hensley, could overwhelm the (thus far unidentified) surplus supply of parking – especially likely in the 53 parks located in the urban core.

And as Planning Commissioner Jean Stev­ens pointed out, there is no good way to evaluate these claims, either. PARD's Ricardo Soliz explained that the agreements would be short-term, allowing for parking-vying businesses to trade off access with each other. But the fact that businesses would be pursuing the parking to comply with code and stay open (as in the Casa de Luz case) makes the idea of taking turns untenable. "If one business didn't have that parking for a year, I'd assume they would be out of business," said Stevens.

Additionally, implementing the parking policy could prove pricey. Hensley's memo points to a number of direct costs that the city could incur. Some would be in the form of staff time that would be expended vetting improvements to the parks, and the public hearings that would be required to complete those projects. Staff would also have to attend the Chapter 26 public hearings that are required when parks are used for commercial purposes. Additional costs would be expected, explained Soliz, to hire an independent appraiser to value the spaces, and for a study to determine which parking lot spaces are surplus. Beyond that, there is an expected cost of installing lighting for parking lots that would be used past the typical "dusk" closure of many city parks.

Then, there is the matter of what constitutes "surplus" parking when dealing with businesses that have different operating hours. Just what is surplus park parking anyway? In her memo, Hensley observes that if parking is truly never used by a park, this proposition would prevent that parking from being converted back into its natural state.

There are many members of the community that side with Council Members Laura Morrison and Kathie Tovo, who voted against the resolution last December. They worry about the precedent that could be set, and fret that the measure could lead to the commercializing of city parks, and a situation where they are, piece by piece, sold off to the highest bidder. Even this idea complicates conceptions of access. If the proposal is approved, for example, who would have the greater right to those spaces? People using the park, or people patronizing a nearby business?

"In theory it's a good idea," said Planning Commissioner Alfonso Hernandez. "I hate the way it's being implemented. I don't think the ordinance is well-written at all."

As it stands now, the code amendment will proceed as is to the Parks and Rec­re­a­tion Board on Tuesday, May 28, then on to Council for a June 6 public hearing. Whether the plan will attract any supporters in the process remains to be seen.

For his part, Riley says he has heard the concerns about the proposed ordinance and continues to explore other options that might fix what remains a complicated issue for the city. 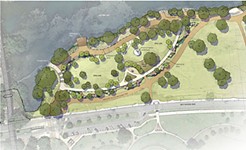