Board votes 8-0 for one-year contract 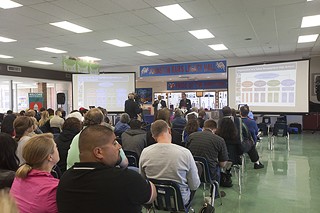 In addition to the AISD board, Eastside community members were also won over by Johns Hopkins during a presentation in April. (Photo by Jana Birchum)

On May 21, the board voted 8-0 to sign Johns Hopkins to a one-year contract, introducing its Talent Development Secondary program to the campus starting in the fall. (Trustee Tamala Barksdale was absent from the meeting.) The $393,690-a-year contract will be covered out of federal Title I funds. If the TDS team helps the campus reach attendance and performance markers assigned in the contract, the deal will be extended annually. However, this is not an indefinite deal, as TDS staff say they intend to stay on the campus only as long as they are needed.

The Baltimore-based research university may be synonymous with health care, but its School of Education has gained a national reputation for providing professional support and stats-driven intervention for school districts. It already works in Texas, running its Diplomas Now program at two San Antonio ISD campuses: Luther Burbank High School and Rhodes Middle School.

While the board was unified in support of the plan, there was less unanimity over a proposal for a contingency plan, in the event Williams rejects the Johns Hopkins agreement. If the commissioner rejects the plan and decides to close the campus instead, Eastside students in grades 11-12 would be sent to Reagan High, while 9th and 10th graders would be split between Reagan, Travis, and McCallum. Trustee Jayme Math­ias abstained, arguing that the board should be concentrating on making an educational model that will appease Williams, rather than packing parachutes for students.

The May 20 agreement came after the first direct meeting between Williams and the board of trustees since January. Since then, all communication had been via Super­in­tend­ent Meria Carstarphen – a game of Chinese whispers that had disturbed many community stakeholders. On May 14, Mathias, Carstar­phen, Board President Vince Torres, and Director of High School Operations Edmund Oropez met with Williams and several of his senior staff to make an informal presentation on the Eastside agreement. (The remaining members of the board are drafting a letter of support for the proposal.) At the meeting, Williams expressed his concern about the lack of concrete plans for the elementary and secondary schools that feed into Eastside – something the district promised it will work on with his staff.

Williams also reiterated his position that his actions were less to do with scores and more driven by the district's failure to comply with the 2011 reconstitution plan. Yet the latest preliminary TAKS scores for Eastside may still slow his hand. At the May 20 meeting, trustees heard that the numbers show growth in all areas, building on the years of achievement by students in the face of state- and district-inflicted redesigns and restructuring.