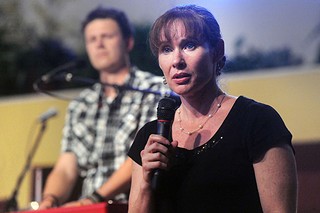 A woman (who asked that she not be identified) reads "Dear John letters" written by women held as sex slaves at a presentation of the White Umbrella Campaign at Northwest Hills United Methodist Church on May 13. The national campaign partnered with Austin-based Restore a Voice and Allies Against Slavery to sponsor the event. (Photo by John Anderson)

› City Council doesn't meet this week but will return to the dais with a full agenda on May 23, when it's scheduled to consider what has turned into a long-running debate over a new governance structure at Austin Energy.

› For the first time in 24 years, Austin ISD voters have rejected a district bond proposal. On May 11, two of four propositions worth $400 million for new schools, athletics, and arts failed, while two measures worth $489 million for technology and renovation passed (see "Bonds: 'Death By a Thousand Cuts'.")

› On the same night, Pflugerville ISD voters sent a clear message in favor of the district's policy of providing employee benefits for domestic partners by re-electing two board members – Mario Acosta and Carol Fletcher – who voted for it. Some Republican lawmakers are seeking to cut Pflugerville's state funds because of the policy, while Attorney General Greg Abbott argues it violates the state's ban on gay marriage.

› A contingent of Austin Police flew to Wash­ing­ton, D.C., May 13 to honor slain Officer Jaime Padron by participating in ceremonies at the National Police Memorial at the U.S. Capitol. Padron, killed last spring at an Austin Walmart as he tried to detain a suspected shoplifter, was the first officer fatally shot on duty since 1978.

› Austin got a little more international on May 14 as a group of 26 foreign ambassadors, including those from Germany, Ireland, and Singapore, visited Travis County. The trip, part of the State Department's Experience America program, emphasized Austin's technology scene.

› Celebrity watchers will see a few new stars in town when J.J. Abrams' hit NBC series Revolu­tion begins filming here June 24. The post-apocalyptic drama is moving from its former home in Wilmington, N.C., where it employed some 300 crew members and hundreds of local extras.

› On May 10, the Texas Department of Public Safety announced that they're opening a criminal investigation into the devastating West Fertilizer explosion. The news followed the arrest of Bryce Ashley Reed for possession of the components of a pipe bomb. Reed, a former EMS volunteer, was one of the most recognizable faces of the disaster after delivering a eulogy for his "best friend" Cyrus Reed.

› A judge in East Texas last week signed an order ruling that the Bible verses and religious messages displayed by Kountze ISD cheerleaders during games "have not created, and will not create, an establishment of religion in the Kountze community." The district had barred the cheerleaders' banners and signs after the Freedom From Religion Foun­da­tion complained. Gov. Rick Perry said that in challenging that ruling the cheerleaders showed "great resolve and maturity beyond their years" for "standing up for their beliefs and constitutional rights."

› Officials announced May 13 that Texas will be receiving $203 million for restoration of areas damaged by the Deepwater Horizon oil spill. The fund will be administered by the National Fish and Wildlife Foundation.

› State Board of Education member Marty Row­ley last week told the Midland County Repub­lican Women that the board will be reviewing CSCOPE curriculum to ensure that social studies lessons reflect traditional gender roles. During his speech, Rowley said the online curriculum system has a "definite leftist bent."