Then There's This: Biscoe: The Most Popular Guy in Town 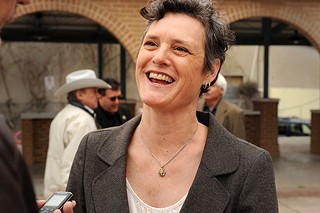 Travis County Judge Sam Biscoe has recently noticed an uptick in his popularity. There's no mystery to the sudden outbreak of niceness: He has the fortunate task of picking an interim candidate to serve 19 months in the Precinct 2 seat on the commissioners court. Starting salary: $95,500 a year. Who among the 99% doesn't want to be Biscoe's friend right now?

Sarah Eckhardt currently occupies the Pct. 2 seat – with one foot out the door to start her campaign to succeed Biscoe, who's retiring at the end of his term in December 2014. Eckhardt, who announced her candidacy for county judge May 1, will be in a tough primary match against outgoing county Democratic Party Chair Andy Brown, who'll officially launch his campaign June 4 at Threadgill's.

But the more immediate political horse race doesn't even involve an election. The focus now centers on the competition to obtain the interim appointment to the Pct. 2 seat. There's a growing number of people who have either confirmed their intentions to apply or are still weighing their options and sizing up the competition.

Biscoe says he can't legally exclude candidates who also intend to campaign for the seat in 2014, but he's made clear his preference of filling the position with someone who's more interested in working on county business than running a campaign. The job was posted May 3 and candidates have until May 17 to drop their names in the hat. Biscoe will release the names of the applicants after that, and says he hopes to name someone by June 1. He says he's had informal conversations with about 10 people considering the job, and reckons that maybe five of them will actually apply.

"I'm probably more popular now than I've ever been in the political community," Biscoe chuckled, noting the unusual number of people who've been treating him like an old friend. "I'm a whole lot closer to you than I am some of these others," he said by phone the other day. The unflappable judge has spent close to 15 years in elected office, as a commissioner, then as county judge.

Eyes on the Seat

The pool of potential candidates includes two former commissioners: ex-Mayor Bruce Todd, who left the Commissioners Court in 1990 to mount a mayoral campaign, and Karen Sonleitner, who lost a re-election bid to Eckhardt in 2006. While Todd is said to still be weighing his options, he has also expressed an interest in running for the seat. Sonleitner, who works in the county auditor's office, says she's "not discouraging any rumors or speculation" about running for the seat, but freely offers a "firm yes" to the question of whether she'll apply for the interim post. She said if she's short-listed and Biscoe's parameters for the position discourage campaigning for the seat, she would abide by those terms.

Other potential interim candidates include Garry Brown, former aide to ex-Commish Karen Huber, who has filed a treasurer report with the county clerk's office to run for the seat. (Attorney Richard Jung and former City Council member Brigid Shea have also filed treasurer reports to run in the Dem primary.) Also said to be interested: former county employee and recent law school grad Veronica Chid­ester, city employee Tina Bui, former City Council candidate and activist Margot Clarke, and Texas Ethics Commission General Counsel Tim Sorrells. This week, attorney and City Hall lobbyist John Donisi's name emerged as a possible candidate for the interim seat; he says he was asked to consider applying for it. "I wouldn't run for the seat, but only serve as a caretaker to keep things moving forward until a replacement is elected," he wrote in an email. "I'm giving it some thought."

Biscoe's preferred candidate is someone who's already familiar with county functions and the budget process (the interim person would play a role in two budget cycles and participate in key votes on a new courthouse). He's also looking for someone who's "fair, even-handed, [and] respected by the rest of the court as well as the county managers.

"My preference is to have somebody willing to serve the rest of the term and move on, because you need to spend 110 percent of your time dealing with the important issues that will surface between now and Dec. 31, 2014," he said. "If you're a serious [political] candidate you really need to spend about half your time out on the campaign trail."

For the next two weeks at least, Biscoe will enjoy his favorability ratings. "I'm having a lot of fun doing this," he said. "There's something about leaving that kind of frees you up. It allows you to get around the stiffness that comes with this job." 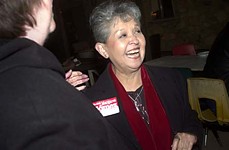