The Changing Face of Mueller

A south-facing aerial photo of Mueller, with a color-coded overlay of areas slated for development. (Adapted from a map and aerial photos prepared for Catellus Development Corporation by McCann Adams Studio (July 2011))

If you live near the Mueller neighborhood, or regularly pass by, you're aware that quite a bit of change is in the Mueller air; the neighborhood has entered a new phase of rapid expansion and infill. The most readily visible development is the new retail center taking shape at 51st and Berkman Drive – soon a real address, in that the Berkman extension through the development and across to Manor Road will be open for traffic any day now, further opening up the still somewhat sheltered neighborhood to its neighbors in Windsor Park as well as to the east and south. Also scheduled is the extension of Barbara Jor­dan Boulevard, which until now has ended at the eastern end of the big-box retail district (Mueller Boulevard), and now will flow southeast through to Berkman. 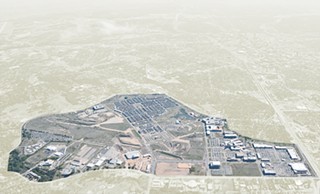 A south-facing aerial photo of Mueller shows the development in its present state, with old airport runways still visible. (Adapted from a map and aerial photos prepared for Catellus Development Corporation by McCann Adams Studio (July 2011))

The new retail center – known officially as "The Mueller Market District" – will be anchored by the still under-construction H-E-B supermarket (scheduled to open in July). As it rises overlooking 51st Street, the complex has a simultaneously futuristic and retro look, with an aerodynamic "wing" fronting the grocery store (echoed over the gas station rising below on the hill), recalling the former Mueller airport while providing architectural flair.

The new H-E-B, at 83,000 square feet not quite as large as its corporate neighbors at Hancock Center or Central Market, will share some of the features of both, with particular attention to organic food alternatives as well as an outdoor performance space. Among other businesses scheduled to move into the district are Twin Liquors, Xian Sushi, Verts (German kebaps), and a Subway franchise. Meanwhile, the existing retail center on the I-35 side is also expanding, with three new restaurants and a Mattress Firm to occupy a new site adjacent to the Home Depot.

Bigger, more distinguishing changes already in progress or in the works include:

• A Marriott Residence Inn rising on 51st, just north of the next new retail site;

• A new patient wing for the Dell Children's Medical Center;

• The Austin Children's Museum, across from Mueller Central overlooking the Lake Park;

Those are just some of the most obvious buildings nearly completed, under construction, or soon to break ground. The 700-acre former Mueller Airport site is primarily a neighborhood, of course, meaning residential development. Along Mueller Boule­vard, just north of the Mosaic lofts that front on Airport, another major multifamily residential development is taking shape, the "Elements at Mueller." AMLI Resi­dent­ial will be developing a multifamily site just east of the Children's Museum (expected to break ground by June), and a block beyond that to the northeast is Paggi Square, a 221-home mixed-model development focused by a central neighborhood park, which includes a playscape that features a pétanque court – a bowling game that has become an attraction at the landmark Mueller Hanger (and at the French Legation and Pease Park), drawing teams from all across Texas and beyond.

Paggi Square currently represents nearly the eastern edge of the advancing residential districts; but further east, on Mueller's southern edge, Wildflower Terrace, a 55+ residential and mixed-use development on the southern end of Berkman (near Manor Road) opened a little over a year ago. Like all the major multifamily developments in the neighborhood, the Terrace is conceived for mixed-use, bringing commercial storefronts together with residences for walkable and efficient neighborhoods.

Trans­portation, as well, is part of the mix, with bus lines already integrated, bike lanes running along boulevards, and – with some political luck and planning – urban rail on the horizon. It's drawn into the plan, just in case.

Almost completely built out west of Berkman, Mueller is inexorably moving eastward, toward the Austin Studios (undergoing their own changes, see "The Changing Shape of Austin Studios," p.28), Troublemaker Studios, and the city's Emer­gency Command Center sites on the northeastern edge, toward a proposed elementary school site and Rathgeber Village on the east, and finally the Southeast Greenway that will mark the neighborhood's Manor Road boundary. The growth of an entirely new and multiform neighborhood in Central Austin has formed a remarkable story – with several more chapters to follow.

Oh, and if you're still wondering if it's pronounced "MYU-ler" or "Miller" – after the former city commissioner who gave Robert Mueller Airport its name – two wings of the Mueller family pronounce it differently. Take your pick.

The photos and renderings on the following pages, designed and compiled by the Chronicle's production staff and photographer John Anderson, provide an overview of the rapidly changing face of the Mueller Neighborhood.