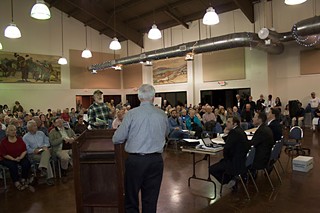 Wimberley residents meet with Rep. Jason Isaac and other officials to air concerns about a threatened water source. (Photo by Rusty Middleton)

The simmering politics of water scarcity in Central Texas boiled over last Thursday night, April 25, when a Wimberley community activist group, Citizens Alliance for Responsible Development, or CARD, called a town meeting to protest the potential "massive development," according to a CARD flier, on the newly acquired 5,000-acre Needmore Ranch on the Blanco River just east of town. Four to five hundred people showed up, depending on who did the estimating. The cavernous main hall of the Wimberley Community Center was bursting with people. All seats were taken and the standing-room-only area was packed. The walls were lined and many others strained to listen from out in the foyer. In a town nervously eyeing the ever-diminishing Hays Trinity Aquifer that is its only source of water, the very idea of hundreds of new wells slurping the groundwater level even lower is causing fear and outrage.

"People in the Wimberley Valley are trucking in water for home use because their wells have run dry when adjoining developments began heavy pumping," said Larry Calvert, a Wimberley area homeowner.

Calvert was the first in a long line of speakers that excoriated not only the possible water hogging new development but also its enablers. They vented their wrath on both state Rep. Jason Isaac, R-Dripping Springs, and Sen. Donna Campbell, R-New Braunfels, who both sponsored bills establishing a Municipal Utility District for McAllen beer distributor Greg LaMantia, owner of Needmore. Some speakers were especially angered by what many regarded as a sneaky end-run around Wimberley's jurisdiction. LaMantia, who is well known for his contributions to Republican candidates, no doubt found willing ears in both Isaac and Campbell when he proposed the MUD for Needmore Ranch.

After Isaac had said he wouldn't support a MUD and broke long-standing protocol by not going to the county with a development plan, Isaac and Campbell promptly sponsored legislation – House Bill 3918 and Senate Bill 1868 in their respective chambers – that would create a MUD just for LaMantia. (A MUD is a common subgovernmental entity that developers use to fund infrastructure such as water services in subdivisions that are usually outside of municipalities. They have the ability to levy taxes and seize property under eminent domain, among other powers.)

The boundaries for LaMantia's MUD neatly skirt Wimberley's extraterritorial jurisdiction by not including about 900 acres of LaMantia's ranch. Thus, Wimberley and to some degree Hays County will have little or nothing to say about a development that could house, under one scenario, as many as 16,000 people – all of them right next door and all of them needing water.

Speaker after speaker denounced this dodge and other aspects of the plan, and it wasn't just citizens worried about their wells who were objecting. In an unusual move, both the city of Wimberley and Hays County passed resolutions opposing the MUD.

Hays County Commissioner Will Conley, whose precinct contains Needmore Ranch, said in a letter to Isaac and Campbell, "Giving a land owner a district without any restrictions opens up a tremendous amount of possibilities in the future that provoke concerns for Hays County and citizens of this area. ... There exist too many unknowns and possibilities that could be a detriment to the Wimberley Valley."

The city of Wimberley was more direct: "Overdevelopment of the Needmore Ranch could have a tremendous negative impact on water quality and quantity for land owners ... [and] local springs," says its resolution. Implied in that statement is the very real danger of finally driving a stake in the heart of iconic and very vulnerable Blue Hole and Jacob's Well, two Wimberley Valley spring-fed swimming holes. Hays County and the city of Wimberley have spent millions protecting Jacob's Well Preserve and developing a regional park around Blue Hole. Wimberley especially would be badly hurt by the loss of Blue Hole. Alex Broun, geologist for the Hays Trinity Groundwater Con­ser­vation District, says, "In the longer-term, large scale pumping from the Hays Trinity portion of Needmore Ranch could adversely affect Jacob's Well and Blue Hole."

Meanwhile LaMantia is seemingly on another planet when it comes to perception of the water-availability issue. According to Hays County Judge Bert Cobb, LaMantia told visitors to his ranch words to the effect of: I'm on a lot of water. I might sell some of it.