Then There's This: Housing Bond Back on Ballot?

After voters' rejection in 2012, November may bring another try 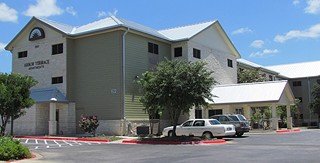 The 2006 housing bond program helped pay for 3,400 new housing units, including the recently opened Arbor Terrace, on I-35 in South Austin, which Foundation Communities converted from a former hotel into 120 furnished efficiency apartments for formerly homeless individuals. Monthly rent ranges from $370 to $445 per month. (Courtesy of Foundation Communities)

Last year's tactical errors leading to a failed housing bond election have become this year's lesson plan for winning community support before an affordable housing measure appears on the ballot.

For that to happen, advocates must convince the City Council to place a bond proposition before the voters in November. A newly launched campaign called Keep Austin Affordable (www.keepatxaffordable.org) has organized to do just that, and its backers include a who's who list of influential civic and business leaders enlisted to help sway Council members, who have until Aug. 26 to call a November election. With last year's defeat still fresh, some city officials are understandably skittish about putting housing on a fall ballot, six months after the May 11 AISD bond election.

Proponents of a November ask are seeking $60 million to $70 million in bond money, with ballot language that clearly explains what the funding will cover. The vague wording of last year's Prop. 15 is cited as one factor in the housing bond's failure; it was the only one of seven propositions that voters rejected, and by a narrow margin. With that stinging defeat, housing activists quickly regrouped for a post-mortem and immediately broadened their community outreach efforts.

A post-election poll conducted by nonprofits Austin HousingWorks and ECHO - Ending Community Homelessness Coalition – showed that about a fifth of those polled said that by the time they made their way down the lengthy ballot to Prop. 15, they were stumped by its vague, confusing language: "The issuance of $78,300,000 housing bonds and notes and the levy of a tax sufficient to pay for the bonds and notes." Say what, now? "They didn't know what it was. They didn't have enough information," said Elliott McFadden, campaign manager for the new effort. "And from our perspective, we also take some of that blame. It was done as part of a larger bond package and we didn't go out and do a big campaign and explain why it was needed."

To help replace some of the bond money that failed to materialize, the Council in Feb­ruary directed $10 million in surplus funds to be spent on affordable housing projects already under construction. And they agreed to consider the possibility of a November do-over.

Last week, Council heard a full-court press update from staff and HousingWorks' Mandy DeMayo on the economic and social benefits of the $55 million already invested in the community as a result of a 2006 bond proposal, which voters approved overwhelmingly. The funding helped pay for more than 3,400 new or renovated housing units for low-income and homeless individuals, and created over 2,900 jobs, according to a new economic impact report commissioned by HousingWorks.

Still, that's hardly a dent in the work that still needs to be done. Austin housing isn't getting any cheaper, and federal housing money is drying up. Rebecca Giello, assistant director of the city Neighborhood Hous­ing and Community Development Office, pointed to a substantial leap in monthly rental rates between 2005 and 2011, when the median rate jumped from $740 to $905. Giello estimated that the current median rental rate stands at around $1,000 per month. That's good news for real estate professionals, but bad news for Austin employees with moderate to low incomes.

Organizers of the new campaign hope to turn things around by pointing to the positive results and return on investment of the 2006 housing bond. Based on voters' previous approval and the additional polling, housing advocates believe the 2012 rejection doesn't actually reflect a community that doesn't care about the city's housing needs. "We simply didn't do our job of getting out there and making the case for an affordable housing bond," McFadden said. "So we've launched this campaign to get out in the community and talk about the success stories, about all the different [development] organizations that have tapped into that money, and leveraged that to bring in additional funds. ... Our goal is not only to pass the bond but really to elevate the discussion about affordable housing as an investment that becomes a community value, not just a single voting issue."