Measure gets nod on House floor 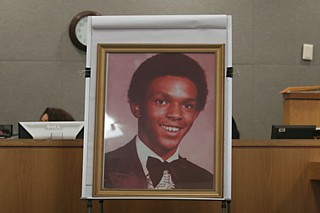 A bill to study the causes of wrongful convictions in Texas passed through the House floor Tuesday morning – but not without several testy exchanges between lawmakers.

House Bill 166, authored by Rep. Ruth Jones McClendon, D-San Antonio, would create the Timothy Cole Exoneration Review Com­mis­sion, named for a man who died in prison while serving time for a sexual assault he did not commit. The commission would be tasked with reviewing criminal cases where there has been a formal exoneration, in an attempt to find the root causes of the wrongful conviction and to make recommendations for avoiding future miscarriages of justice.

Backers of the measure have tried to move the bill through in previous sessions without success. This time around, with a wealth of bipartisan support, the measure is in much better shape. Nonetheless, backers on the House floor were faced with a number of probing questions, mostly from Rep. Larry Phillips, R-Sherman, who took issue with some language within the measure: Why would the commission not be subject to sunset until 2025, he asked, and why does the bill mention "wrongful execution" if this is about wrongful convictions? An amendment by Rep. Jeff Leach, R-Plano, reduced the time to sunset to eight years, or 2021. As for the wrongful execution language, Leach – who has signed on with Rep. Myra Crownover, R-Denton, as a joint author of the bill – said the idea was to prevent all wrongful convictions. Indeed, among Texas' confirmed wrongful convictions are those who were sentenced to die, but who escaped that punishment – including Anthony Graves and Clarence Brandley.

Phillips also took exception to a provision that would allow courts in future proceedings to use findings of the commission – including whether judges or lawyers participated in misconduct leading to the conviction. "I don't understand why" if the bill is intended to "fix [problems in the system] and to go forward," why the commission would be allowed to go back with "hindsight 20/20 ... to try to punish people," Phillips asked Rep. Joe Moody, D-El Paso, a former prosecutor who sits on the House Criminal Jurisprudence Committee, which passed the bill on to the floor on a 7-1 vote. "I think that if you discover wrongful acts" during the course of a review, Moody replied, "that should be out in the public eye."

The measure passed on second reading on Tuesday and finally passed – moving on to the Senate – on a record vote of 115-28 with House Speaker Joe Straus present but not voting*.

*The original version of this story stated that "the measure passed on an unrecorded voice vote." After press time, news broke of a second reading and record vote.