Video footage from D.A.'s booking not as sensational as expected 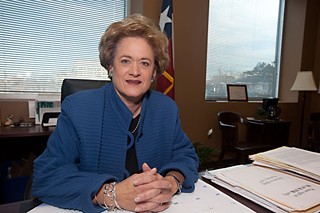 Travis County District Attorney Rose­mary Lehmberg has nearly completed the first week of a 45-day jail sentence she was given April 19 after pleading guilty to driving while drunk.

In the courtroom, Lehmberg appeared contrite, offering a small smile to co-workers and friends who'd gathered in Judge Carlos Barrera's County Court-at-law No. 8 just after 9:30am last Friday. Standing with her attorney David Sheppard, Lehmberg pleaded guilty, and Barrera handed her a 45-day sentence and a $4,000 fine – the maximum monetary penalty for the Class A misdemeanor charge that also carries the potential for up to a year in the county jail. Lehmberg will also lose her driver's license for 180 days beginning May 23, Barrera said. Lehmberg was then cuffed by a deputy and escorted out of the courtroom and off to the jail for booking.

Lehmberg was arrested April 12 and charged with drunken driving after a motorist called 911 shortly before 11pm to report an erratic driver on FM 620 near Comanche Trail. The driver in question was Lehmberg, who told a Travis County Sheriff's Office deputy that she'd had two vodka drinks earlier in the evening. (According to an arrest affidavit, an open container of vodka was found in the passenger compartment of the car.) Yet, according to jail records, Lehmberg's blood-alcohol content was a whopping .239, nearly three times the legal limit for driving. A video recording made by deputies in the jail depicts Lehmberg struggling with personnel at several points during her overnight stay – including grabbing at the hands of a jailer who is trying to remove her jewelry. Lehmberg was placed in an isolated cell and, with her hands still behind her in cuffs, she kicked the door several times to get the jailers' attention, prompting them to put her in a restraint chair, in order to keep her from hurting herself, a jailer told her. They also put a so-called "spit mask" over her face when taking her to have her blood drawn – not because she was spitting, but in order to protect her identity, deputies told her. Lehmberg argued with the deputies at times, and asked repeatedly if they had called Sheriff Greg Hamilton to let him know that she'd been booked; the jailers said they had not. "I wasn't drunk," Lehmberg told the jailers. "You've ruined my career."

Although she was clearly upset, Lehm­berg's behavior as depicted in the videos is not as sensational as expected, based on a description included in a lawsuit filed last week that seeks to have her removed from office. In the lawsuit, employment and labor attorney Kerry O'Brien alleged that Lehmberg had kicked and spit at officers, an account he said he got from law enforcement officials in the jail that night. In talking to reporters after Lehmberg pleaded guilty, Sheppard adamantly denied those allegations. "That did not happen," he said sternly.

Nevertheless, O'Brien said he felt a moral obligation to file the lawsuit, which relies on a Local Government Code provision added in 1987 that allows for the removal of a county official, including the D.A., for incompetency, official misconduct, or "intoxication on or off duty caused by drinking an alcoholic beverage." According to the statute, a district judge may take action to advance the case but is not required to do so; a dismissal is not subject to appeal. On Tuesday, Judge Lora Liv­ing­ston, the county's presiding civil judge, signed off on an order that will let the suit move forward.

O'Brien said he thinks that if the city's top law enforcer is allowed to do her time without any other real consequence, it would signal that the county doesn't take the offense as seriously as it should. Indeed, on Monday afternoon Austin Police Association President Wayne Vincent echoed that sentiment in announcing to reporters that the union had resolved that Lehmberg should step down (though, apparently, Vincent did not check with his board or members before deciding to issue a statement on their behalf). On the heels of Vincent's decision to wade into the morass, O'Brien penned a letter to both the Travis County Sheriffs' Law Enforcement Assoc­i­ation and Travis County Sheriff's Officers Association, asking that the two deputies' unions add their voices to the call for her resignation. At press time, neither of the associations had responded to requests for comment.

After the hearing last week, Sheppard told reporters that he disagreed with O'Brien's view that Lehmberg should step down. A 45-day jail term is "without a doubt the harshest sentence" a person would ever get for a first-time DWI offense," he said. Lehmberg made a "terrible mistake," he said, but it should not be allowed to overshadow her nearly 40 years of dedicated public service.