There are few things more dangerous than a freshman legislator with a plan. On May 23, Rep. Scott Sanford, R-McKinney, decided that he was going to lead a rebellion to end the lottery in Texas. He and 80 other assembled Tea Partiers and evangelicals voted against House Bill 2197 by Rep. Rafael Anchia, D-Dallas. This was the re-authorization bill for the Texas Lottery Commission: no commission, no lottery. Sanford was briefly jubilant about how he had vanquished this "immoral and predatory tax." However, furious veteran lawmakers quickly explained to Sanford and company that, like it or not, no lottery means that the estimated $2 billion the state's gambling venture raises for public schools every biennium also disappears (Anchia also noted that ending the commission would also mean an end to charity bingo – try explaining that to the VFW, he told reporters). After four hours of arm-twisting, the House took a second vote and approved the bill 91-53.

The Republican leadership thinks it can make it rain – financially speaking – if they pass legislation for new reservoirs, water pipes, and conservation programs. HB 11, which passed out of the House Appropriations Committee on April 23, would draw $2 billion from the Rainy Day Fund to create a water infrastructure bank. In a statement, Speaker Joe Straus wrote, "No other legislation is as directly tied to our economic success," and argued that the drought "has cost Texas billions of dollars in economic ­activity." 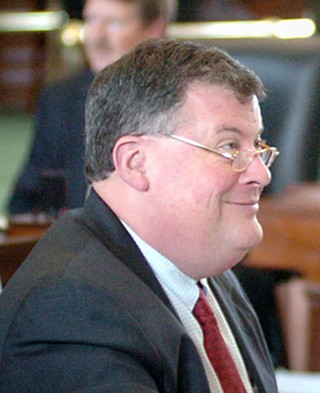 After years of opposition, Republicans are finally moving forward with a plan to pull $5.7 billion from the state's Rainy Day Fund for transportation, water, and education. Senate Joint Resolution 1 by Senate Finance Committee Chair Tommy Williams, R-The Wood­lands, proposes (like HB 11, above) $2 billion to fund a new State Water Implementation Fund (effectively a state-run bank to loan money to local government for water infrastructure), $2.9 billion for the Texas Department of Trans­portation, and $800 million for schools, split between $500 million for the Foundation School Program and $300 million for incentive pay programs. With $6 billion still left in the fund, Democrats wanted to add another $1.2 billion for schools and $50 million for Medicaid, but were unsuccessful. That's One Way to Pass a Bill

Sen. John Carona, R-Dallas, was having trouble getting new regulations for payday lenders in Senate Bill 1247 out of the Senate – so he threatened to talk publicly about how the industry had lobbyists "around every corner in this Capitol" and which senators were in their thrall. Mysteriously, opposition to the measure vaporized and it now heads to the House. The bill is scarcely draconian – a $1,000 penalty for each violation – but the payday lenders fought it. Carona had previously admitted that his measure is far from perfect. He has called it "an ugly baby," while the Center for Public Policy Priorities is calling on lawmakers to return it to its tougher, unamended, committee version. However, Carona has warned this could be the last chance for any reform: If legislators were to wait until 2015, the industry's influence under the dome would be unstoppable.