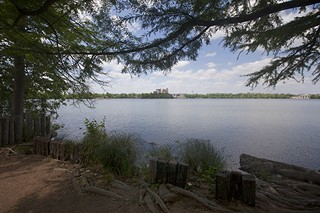 The ongoing dismantling of the Holly Power Plant, seen in the background, served as cause for Earth Day celebration on Sunday as East Austin residents and local environmentalists gathered near the shore of the Colorado River to commemorate Austin's largest reduction of its carbon footprint. (Photo by Jana Birchum)

› City Council meets today (April 25) with plenty on its plate, and Austin Energy governance on its mind – a decision on an independent board will wait until next month, and meanwhile the budget process has begun, with a full-day work session May 2. See "Council Preview."

› The Rosemary Lehmberg saga proceeds, as the Travis County D.A. begins her 45-day jail sentence for DWI, more videos of her arrest and incarceration hit the Internet, and a lawsuit demanding her removal goes forward – and in the shadows? The potential appointment of a replacement by Gov. Rick Perry. Austin Police Association President Wayne Vin­cent called for Lehmberg to resign; following that, lawyer Kerry O'Brien, who filed the suit seeking her ouster, penned a letter to presidents of the Travis County Sher­iffs' Law Enforcement Associ­a­tion and Travis County Sheriff's Officers Associ­a­tion asking that they do the same, or explain why they won't.

› Four Austin police officers are on administrative leave after an officer-involved shooting on Valdez Street in Southeast Austin Tuesday evening. Police responded to a call about a suicidal man, and, after the man aimed a rifle at them, police shot and killed him. Chief Art Acevedo said it appeared to be "suicide by cop."

› State and federal agents spent hours Tuesday taking boxes of items from the corporate offices and warehouses of Twin Liquors on Airport Boulevard. Officials confirmed they were working on a joint state-federal operation there, but declined to offer any additional details.

› The Austin Fire Department got the news this week that it will be the subject of a federal inquiry by the Department of Justice's Civil Rights Division into whether its hiring practices discriminate against minorities – a longtime subject of controversy within the city and the AFD ranks.

› The murder trial of Kaitlyn Ritcherson began this week. She's accused of the 2011 stabbing death of Huston-Tillotson University track star Fatima Barrie outside a club at Fifth and Lava­ca. Ritcherson has said she isn't responsible, though witnesses reportedly said they saw her outside the club, readying to make trouble, and with a knife in her hand.

› Sequestration has hit the airports. The federal spending cuts have begun to cause flight delays because of air traffic controller furloughs, including at ABIA, where staff reductions have meant a slowdown in landings and takeoffs. Maybe now that it's not just Meals on Wheels and its elderly clients taking the hit, more folks will acknowledge some uses of government.

› Speaking of government, where was the state of Texas when West Fertilizer was storing large amounts of explosive ammonia-based chemicals near homes and schools with little or no oversight? While you ponder that question, officials are investigating the cause of the fire and explosion that took 14 lives and injured 200, laying waste to the small town.