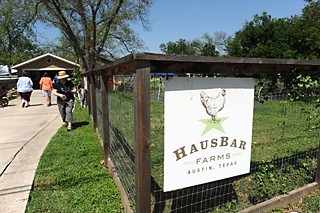 HausBar Farms expects to reopen once it clears inspection. (Photo by John Anderson)

Public reactions to initial reports of the closure of HausBar Farms (see "Com­mun­ication Breakdown," Food, April 12) have ranged from unwavering support of the urban farm movement to extended discussions of the future of land use in East Austin.

Following an official city review, HausBar's site plan to operate as an urban farm at its Govalle Avenue location has been approved by the Planning and Development Review Department. The utilities on the house in the front of the property have been capped, so the farm is no longer considered to have two dwellings, thereby meeting the requirements to operate as an urban farm. Owners Susan Haus­mann and Dorsey Bar­ger have complied with code enforcement and are now awaiting inspection. The designated use as an urban farm will not change the site's single-family zoning.

However, while HausBar Farms remains closed for now, questions remain over appropriate land use in residential neighborhoods. At Monday's Sustainable Food Policy Board meeting, Susana Almanza of People Organized in the Defense of Earth and Her Resources (PODER) and Daniel Llanes of both the Govalle/John­ston Ter­race Contact Team and PODER recommended areas in need of clarification in the urban farm ordinance, currently under review. Almanza's recommendations included the need for precise language regarding the definition of an urban farm, the raising and slaughtering of fowl to sell, allowed methods of composting, and urban farms' potential impact on affordable housing.

This was in sharp contrast to testimony given to City Council on Feb. 28 in which both Almanza and Llanes painted a vivid portrait of a neighborhood enduring a "mass production operation." Up until this point, the urban farm ordinance has been considered a permissive one, but these new proposals for increased restrictions worry many urban farmers who have been operating for years, or even decades, without incident. Carol Ann Sayle of Boggy Creek Farm says there is a general sense of unease: "We don't know what the ordinance is going to say, so how do we plan for the future? Maybe we shouldn't plant a fall crop. We just don't know."

Historically, PODER has effectively organized the East Austin community concerning appropriate land use and environmental injustice, playing a central part in the Nineties relocation of the petroleum tank farm off Airport Boulevard, as well as the more recent closure of the Holly Power Plant. PODER has worked to rezone properties in East Austin from commercial and industrial zoning to residential zoning, resulting in the removal of harmful industry and businesses out of residential areas. In fact, in large part due to the work of PODER, East Austin is an attractive location for urban farms; what was once an undesirable, partly industrial area is experiencing an influx of new homeowners, businesses, and restaurants.

PODER insists its involvement in the HausBar dispute is strictly a zoning issue and not an attack on the urban farm movement. According to Llanes: "There is a cultural bias element in this; there's a racist element. It's just, you know, fact, that the city comes down harder on black and brown people who are in violation of codes than they do on white people in this part of town, and west of I-35 you'd never find these situations. I lived 20 years in Old West Austin so I know what I'm talking about. ... If [it] had been a black or brown family doing this, they would have been shut down the first day. But instead, because there's a national trend for urban farms, and all that, it's a very popular thing and that's all good [and] I'm on board with that – but I'm not on board with the exploitation of our community and skirting the law, just because you can."

City officials ultimately closed the farm for operating without required permits – initiating the review process now in progress – and the controversy continues to concern many residents of the neighborhood. Neighbor Louis Polanco, the initial complainant over the composting smell, maintains the farm is harming the neighborhood. He says if the city won't help, he will begin reaching out to state representatives. But Beatrice Salazar, a 49-year resident, says: "I'm so happy the farm is there, and I wouldn't want the farm to go anywhere, no way. The land is used the way it's supposed to be, and I'm so proud of it." And Jacob Perkins, a recent transplant to the area, says the farm is one of the reasons he chose to purchase a house in the neighborhood: "It's great to have people that care about the land that interact and engage with the community."

As result of the recent difficulties in interpreting the urban farm ordinance and determining its precise limits, a working group of the Sustainable Food Policy Board is working with stakeholders to draft amendments to the ordinance, which will go to the Planning Commission for approval and then to City Council for action later this year. The controversy surrounding the closure of HausBar will undoubtedly affect other Eastside urban farms. Springdale Farm's Paula Foore asks, "What do the changes to the code mean for all of us? We're waiting to see because I imagine it will affect everybody."