As special events grow, so does the need for police 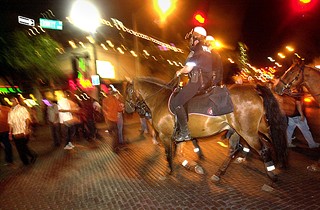 Twenty years may pass before Austin experiences the sort of growth that pushes it to a development level on par with – in the parlance of best civic hopes – an international city. But, for a handful of weekends every year, that ambition is a dead certain reality.

As is the accompanying strain on local infrastructure. Don Pitts is the manager of the city's Music Division. "The city just doesn't have the capacity for the 300,000-plus that were here for the music portion of South by [Southwest]," he told the Chronicle. "This urban landscape is not designed for – for that."

The 2013 level of that – along with the earlier announcement that the Austin City Limits Festival would now be a two-weekend affair, as well as the first year of Formula One – was enough to drive city officials to create a task force that will examine a host of city operations as they relate to SXSW, and, by extension, more generally to "special events." The effort would include municipal court representatives, people in the city attorney's office, public safety hands, planning and development review, code compliance, transportation, and – naturally – the music office.

Embedded in all of this discussion is the narrower subject of how many cops it takes to police Austin when it isn't enjoying (or enduring) a deluge of festivalgoers. The questions were all conflated at the April 1 meeting of the Public Safety Commission. Commissioners and Austin Police Depart­ment brass knocked around a pending, prebudget hearing request from headquarters for 116 new officers – and more general ideas about ideal force strength, e.g., the city's "2.0 officers per 1,000 residents" ratio, and the like. Then Austin Police Assoc­i­a­tion President Wayne Vincent brought up SXSW and its economy-driving kin.

"There's another aspect to this here in Austin that might require consideration of a little more than that [2.0] formula, and that is we're becoming one of the biggest special events venues around. And we are being stretched very, very thin," Vincent said. "When you talk about investigators, when you talk about the entire operation of the police department, they are interrupted for all these special events now, and people are taken away from case loads ... to perform these special events basically for some promoter." Vincent then made his pitch explicit. "Any consideration we make as to what is the sufficient number ... has to now start taking these special events into account." APD Chief of Staff David Carter didn't go quite that far, but he did acknowledge the problem. "The issue of special events is a huge issue, as the city becomes more attractive, more popular," he told commissioners briefly, before entertaining commissioners' worries about local drug cartel activity.

Later, Pitts offered the Chronicle a street view. "The APD has confirmed that Sixth Street on Friday night [of SXSW] was the most people they'd ever seen, and some of those officers had been working it for 16 years," he said.

Council Member Bill Spelman is a frequent and deliberative critic of the 2.0 ratio. He said that – though the need for more public safety officers may be real – it doesn't necessarily justify the creation of 116 new full-time officer positions. "It may very well be that the need is for more cops, but that doesn't mean that we need 116 more FTEs [full time equivalents] in the Austin Police Department to cover four weekends a year," he said. "If you need more cops, you can hire people from overtime, you can borrow police officers from other jurisdictions – have an interlocal agreement where we use Travis County sheriffs – or even people from Hays County, Williamson County, properly trained, can do a lot of the things that we have Austin police officers do." Spel­man also suggested that the city could pay for all of that "from the events themselves."

"To some extent, it's our job to provide law enforcement, police services for special events," he said. "But at some point the events become so large, that it makes sense for them to pay for some of that law enforcement requirement themselves." This idea may be gaining steam with some internal staff discussion about the creation of just such a fund. Spelman said that he wasn't yet sure how it might operate.

Whatever form it takes, it's clear from city staff's postmortem on the 2013 SXSW that changes are coming. In a presentation to city management last week, staff gave itself credit for "preparation and execution," and also offered a list of items that might go better next time around – more definition concerning event requirements, traffic issues, that sort of thing.

Pitts said his office would take "a more proactive role" with regard to the 2014 edition of the Festival. "We're starting the planning for South by [Southwest] 2014 now," he continued. "We're already 11 months away, and we will soon be 10 months away." Meanwhile, staff from multiple departments are working on changes to what Council Member Mike Mar­tinez calls a "comprehensive special events ordinance."

"I think what we've seen with the last several special events is that there truly is a need for a comprehensive special events ordinance," Martinez said in an email. "Coun­cil passed a resolution asking for the ordinance last year, and I know that staff is working hard on crafting an ordinance for us to consider – pulling in the lessons we learned from the last South by Southwest. My hope is that we can have some language later in the spring or early summer that considers the needs of all our departments, from both a code and staffing perspective, allowing us to better respond to these large-scale events."

That could also fuel other changes, says Martinez. "We know that the city benefits immensely from the economic impact of our large special events, and it makes perfect sense to talk about departmental needs before we craft a comprehensive ordinance."

A public meeting to discuss the proposed special events ordinance is scheduled for 3pm, Friday, April 19, at One Texas Center, Rm. 325. There's also an online survey, posted at www.austintexas.gov/department/special-events-0.