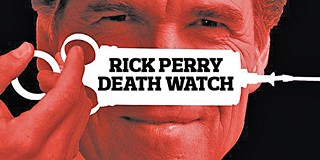 Seventeen-year-old Dexter McDonald and his two friends had just come out of a club in Navarro County and gotten into his friend's car when Ronnie Paul Threadgill, clutching a handgun, ran up to the vehicle and fired two shots into the car. The first shot missed the occupants; the second passed through McDonald's arm and lodged in his chest. McDonald's friends jumped out of the car, but McDonald could not; Threadgill got into the driver's seat and drove off. He stopped nearby, pulled McDonald out of the car, and left him near a stop sign before taking off again.

McDonald died; Threadgill was charged with capital murder, tried, and sentenced to die. If the state goes through with his execution on April 16, Threadgill will be the 494th person to be executed in Texas since reinstatement.

At issue is whether his trial attorney – and then the state habeas attorney – rendered ineffective assistance of counsel on several counts: by failing to ask the court for jurors to be given the option of convicting Threadgill on the lesser charge of felony murder (attempting to commit one crime and engaging in a dangerous act that causes someone to lose life; unlike capital murder, there is no intent to kill in felony murder) and by failing to thoroughly investigate a previous shooting case out of Limestone County. In order to prove Threadgill would remain a future danger unless sentenced to death, prosecutors brought a host of evidence about his past. Indeed, at the time of the McDonald killing, Threadgill, then 29, had spent almost all of his adult life in prison; among the bad acts prosecutors used as evidence against him was an allegation that he had shot a man named Erik Martin in a previous and unrelated incident in another county. What Thread­gill's defense apparently did not find out was that those Limestone County charges had been dropped after prosecutors found that there was "conflicting evidence" in the case.

Threadgill's claims were ultimately shot down, however, because they had not been raised in his first appeal. And on April 3, the Fifth U.S. Circuit Court of Appeals rejected his most recent appeal, which argued that the state habeas attorney was also ineffective for not calling into question the efficacy of the trial counsel. Whether these specific types of appeals can be made in Texas is actually the subject of a pending case before the U.S. Supreme Court, styled Trevino v. Thaler. The Fifth Circuit last week declined to stay Threadgill's execution, however, arguing that regardless of the outcome of the Trevino case, Threadgill is procedurally barred from having his claim heard. Threadgill's attorney, Lydia Brandt, is appealing that decision to the Supremes; at press time, a decision in the case was still pending.

[Ed. note on the three executions scheduled for last week (see "Death Watch," April 5): Rickey Lynn Lewis was executed on April 9. Kimberly McCarthy's April 3 execution was postponed until after the Legislat­ive session, with Dallas County District Attorney Craig Watkins' blessing, to allow for the possibility that a bill could pass and affect the case's outcome. And Rigoberto Avila's April 10 date was delayed until July 10, as state District Judge Anna Perez granted his attorneys more time to investigate possible new evidence in his case.]