On the road to high-speed paradise, hurry up ... and wait 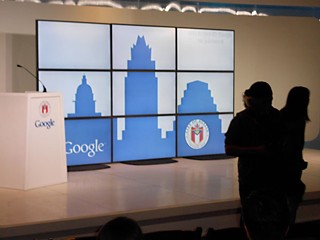 The atmosphere at Brazos Hall on Fourth Sreet Tuesday was a combination toddler's birthday party, media love fest, and Christ­mas morning – if what you found under the tree was a gift certificate that couldn't be cashed for at least another year. From Mayor Lee Leffingwell to Gov. Rick Perry, and certainly a packed VIP house that applauded on every cue, we were all Google Giddy, enthralled by the notion of speed, speed, and more speed!

"We're here because speed matters," declared Google VP Milo Medin, appropriately, since Google Fiber's calling card is a Web that would be "100 times faster" than current paltry access – and every other reference to the new Internet service cited the importance of high speed. "Internet speed is like oxygen," declared the video of Austinites praising Fiber. "Oxygen you take for granted until it disappears ... and it gets sucky."

Medin continued, "At Google we've been obsessed with speed, since the earliest days of Google Search. ... Speed matters because it's the foundation for future innovation on the Web." So it was all the more dispiriting when, a few moments later, Medin slipped in, "Starting next year, we're going to build a similar build-to-demand program as we did in Kansas City." That was not exactly a surprise, since K.C. customers, granted the first franchise in 2010, have only begun getting Google-connected in the last few months. The enthusiasm in the room was undiminished, but by the end of the day, the Web's Twit­ter-frenzy had cooled to a mild celebration. In cyberspace, speed certainly matters – but out here in the mundane physical universe, building stuff takes time.

Nevertheless, the confirmation that Google will make Austin its second Fiber site deserved its moment in the sun. Later in the day came the news of at least one indirect benefit: AT&T announced its intention to offer competing gigabit service in a press release that simultaneously trolled for any "incentives" granted Google. Google and the public officials on hand were adamant that no economic incentives were involved in the Austin project.

That's all to the good, although a trifle surprising, since Gov. Perry, the king of corporate incentives (and campaign kickbacks) via his Texas Enterprise Fund, was on hand to congratulate Google's role in the "Texas tradition of freedom, enterprise, and innovation." Perry and his political allies like to pretend that all economic progress is the sole result of independent entrepreneurs, although neither the Internet nor Google would exist without the institutional research and seed money provided by public funding. He even twice cited privatized space efforts as especially noteworthy, when space exploration programs are only remotely possible because of government creation and innovation.

That was dubious enough. Much harder to swallow is Perry's enthusiasm for cyber-tech expansion while he is simultaneously and grandiosely standing in the way of expanding health care services for millions of Texans. The governor's political feud against "Obamacare" is at the direct expense of the 6.3 million or so of his constituents without health insurance (and indirectly the rest of us, who pay in higher rates and for emergency care); and his adamant opposition to any expansion of Medicaid not only harms the 1.5 million or so who would be eligible, it costs billions in federal dollars that would fund Texas hospitals and benefit the state economy at least as well as high-speed Internet.

That curmudgeonly notion was not raised at the Tuesday event, although the incidental commentary kept mentioning innovations in health care as one of the likely outcomes of Google-speed. For far too many Texans, not to mention the common good, any health care at all would seem to take priority over a really, really, really fast Internet connection.

To her credit and Austin's, Council Mem­ber Laura Morrison did cite "digital equity" as one of the local values Google is committing to pursue. Google's project is understandably market-driven – that is, it will move first into those "fiberhoods" where demand is strongest, and that inevitably means where folks have the ready money to pay for it – but the company has also pledged to provide institutional public connections, and years of free, basic broadband in return for a flat $300 connection fee. Kansas City's newsweekly, The Pitch, has reported some slowness in providing service to low-income neighborhoods, but editor Scott Wilson told me that more recently, Google "seems to have moved to a more flexible stance."

The main obstacle in K.C. from the 2010 inception remains, well, speed. "There's no sense that Google has decamped from Kansas City," said Wilson, "but it hasn't come close to completing its original mandate," and the slow progress has been accompanied by a dearth of information: "Expect a lot more media days ... and not a lot of hard answers." Wilson said the stalled rollout has inevitably affected the public buzz. "The spectrum seems to be: You start out happy, and then nobody wants to be unhappy, so you settle into a groove of somewhat dismayed curiosity."

In Austin, we're still very much in the happy stage, and far be it from me – already Googled up to my elbows at work and home – to rain on the hometown parade. "Google Fiber will change how we live and how we work, in ways we don't even know about yet," declared Mayor Leffingwell, "but it will all be for the better."

We should expect nothing less, of course – but it looks like it will take a while before we know just how, and when.