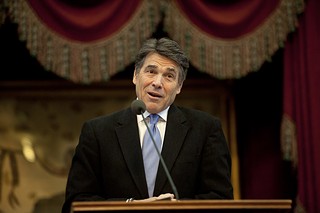 April began with dueling press conferences over Medic­aid expansion. On Monday, Gov. Rick Perry, Lt. Gov. David Dewhurst, neophyte Sen. Ted Cruz, and a brace of GOP reinforcements denounced any expansion as merely an Obama administration scam designed to bankrupt Texas and deliver us all to D.C. tyranny. Perry fulminated that Medicaid and Obamacare are "broken systems" and declared, "April Fools' Day is the perfect day to discuss something as foolish as Medicaid expansion, and to remind everyone that Texas will not be held hostage by the Obama administration's attempt to force us into the fool's errand of adding more than a million Texans to a broken system."

Those million-plus Texans, of course, would become eligible for insured health care they're not currently receiving, but Cruz and Dewhurst wanted everyone to know that the first provision of federal money is just like a drug dealer or cigarette salesman who gives you that "first hit" for free and then expects to get you "hooked." Cruz later told a San Antonio radio station that expanding Medicaid would inevitably overwhelm other state priorities, and lead to the release of "violent criminals" into the streets. (Um, what are these guys smoking?)

A few hours later, Democrats held their own press conference – featuring several legislators, Congressmen Lloyd Doggett and Joaquin Castro (with twin brother and San Antonio mayor, Julian Castro), and public officials from around the state. They pressed the Legislature to defy Perry and accept federal government funding that would expand health care coverage to 1.5 million Texans who currently have none. Federal funds (estimated at $79 billion over 10 years) would cover 100% for the first three years, 90% thereafter – not exactly extortion rates, and all of it spent in the Texas economy. Then there's that pesky matter of emergency room care, paid for by local property taxes and by higher health insurance rates for all ratepayers.

As Anne Dunkelberg of the Center for Public Policy Priorities puts it, "All Texans should call on our state leadership to embrace this historic opportunity to expand Medicaid to dramatically increase the number of Texans with health insurance. Doing so will save local tax dollars, be a boon to our economy, and, most important, be a huge step toward providing all Texans with access to health care." But Perry and the Republican leadership have dug in their heels, and the Monday press conference was in part aimed at Republican legislators deemed insufficiently hardcore in opposing federal funding of health care in their districts.

Perry had also suggested that ineligible people, too well off to receive Medicaid, are somehow gaming the system, but Castro pointed out that the program is already means-tested. Said Doggett, "There are a lot of Texans and a lot of our poorest children that have their lives in the game. Their health is at stake. They very much have skin in the game."

Monday was also April Fools' Day – all day – at Burnt Orange Report, where every post featured some wacko pol announcing a ridiculous position or two. The blog apparently caught the bug from Mayor Lee Leffingwell's office – which had issued an absurd press release declaring that Esquire magazine had designated him "America's Best Dressed Mayor" – and followed that with goofy shots at such targets as SXSW (a House committee hearing on whether the Festival has "sold out"); Gov. Perry ("unable to name all four seasons"); the Texas Supreme Court ("legalizes gay marriage"); and, inevitably, Tomball GOP Rep. Debbie Riddle, allegedly sponsoring a bill that would ban the "production, consumption, or transport of breakfast tacos." Surprisingly, Riddle responded to the joke in a press release: "The Burnt Orange Report referred to my bill as the Terror Taco Prevention Act, which is wrong in name but right in spirit. My bill has everything to do with preventing Taco Terror. However, it is the Guano Loco Taco Act. Its purpose: To prevent lame breakfast tacos from terrorizing the great State of Texas." If you have the stomach for any more (jokes, not tacos), visit www.burntorangereport.com.

A Texas Gun Sense rally will take place this Saturday at the Capitol, but there's precious little of that commodity at the Lege. Most of the gun legislation filed, and all the bills with some chance of passage, seek to loosen gun regulation rather than tighten it. In the latest wrinkle, Sen. Craig Estes, R-Wichita Falls, introduced SB 1857, which would provide additional certification to gun instructors for delivering enhanced training for schoolteachers with concealed carry licenses for "school safety training." That's one way the wind is blowing. On the other hand, in gun-happy Texas, it's worth noting that a February University of Texas/Texas Tribune survey showed Texans strongly in favor of universal background checks for gun purchases. While opposed or lukewarm on other gun control measures, fully 78% of Texans "strongly" or "somewhat" support criminal and mental health background checks.