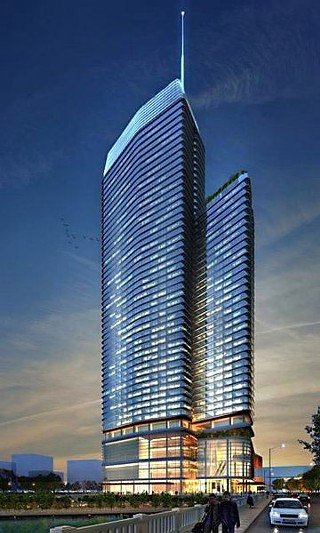 The 50-story penumbra cast by the new Fairmont Austin hotel at East Cesar Chavez and Red River will not be the only shady thing about the project. The tower is being financed by Manchester Texas Financial Group, whose founder and chairman, Doug F. Manchester, helped bankroll a far less glamorous project – California's Proposition 8, which banned same-sex marriage. The partnership is an odd fit for the Canada-based luxury hotel operators, who actively court the "pink dollar" through direct promotions and membership in the Inter­na­tion­al Gay & Lesbian Travel Associa­tion. Fairmont properties are routinely listed as among the top LGBT-friendly hotels.

Manchester properties, however, are just as routinely boycotted. Following news that Manchester donated more than $100,000 to the Prop. 8 campaign, his holdings became a target for LGBT activism. In his home base of San Diego, activist group UNITE HERE Local 30 held weekly protests in front of his namesake Hyatt hotel. The protests and resultant boycott were estimated to have cost the hotel more than $2 million.

Although Manchester is no longer affiliated with that property, the local furor is still simmering, with most of the criticism focused on his purchase of The San Diego Union-Tribune. Since the purchase, the paper of record has become a mouthpiece for Man­chester's "fair and balanced" conservative views. When President Barack Obama made his support for marriage equality known last year, the U-T reported that the president had "pushe[d] [the] court to force gay marriage on all states."

Despite all the backlash, Manchester can boast of having at least one gay friend. Contrarian usual suspects GOProud have flocked to his defense quicker than you can say "sellout." In return for $16,000, they picked the Manchester Grand Hyatt as the site for a reception honoring lesbian talk radio host Tammy Bruce – most famous for being the person to whom the religious right points when they say "not every gay person supports same-sex marriage." Reportedly, all participants were welcomed warmly with a fruit basket.