SXSWedu: A Conference and a Festival ... Times Two

It's pencils down at SXSWedu, and conference executive producer Ron Reed is hoping that the education-centered gathering will get top grades and extra credit from attendees when they see his team's creation. With the opening sessions just days away, he said, "It takes on a personality and an energy of its own." 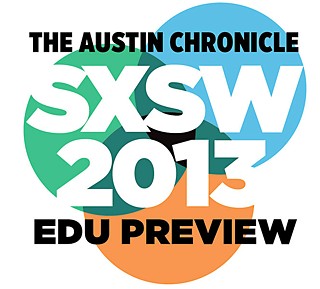 Last year was SXSWedu's freshman outing. For 2013, attendance is expected to double. Reed said, "The big thing that we've done is grown from having been a conference last year, to really being a conference and a festival this year." All the conference elements are still there. A revamped volunteer advisory board has whittled almost 800 session proposals down to roughly 150 talks, workshops, and panels. Reed said he was especially excited by the three keynote events. Each represents a different component of modern education policy: Detroit school principal Asenath Andrews (See "A Place Where People Know Us," below) is a hands-on educator; Coursera co-founder Andrew Ng and edX president Anant Agarwal will have a conversation about massive open online courses; and Microsoft founder Bill Gates will represent the intervening hand of philanthropy. However, Reed said, "We have developed a lot of additional engagements for our attendees."

There will also be 10 education-based documentaries screening at the Alamo Ritz, which Reed called "a little bit of an homage to our friends at SXSW Film." He's also announced a policy forum in partnership with the Texas Tribune, "addressing high-relevance policy topics in public and higher ed." And, for somewhat a less passive experience, Make magazine co-founder and distinguished speaker Dale Dougherty ("Hacking the Physical World") will be hosting a Makerspace "where we'll have both session programming as well as a variety of makers on display with 3-D printers and laser cutters."

And that's just the beginning, Reed said: "My poor staff, after working on that, I kind of put a 'times-two' on top." This year marks the first SXSWedu college and career fair: Reed projects up to 5,000 Central Texas students from multiple local school districts will come to learn about what "college ready" really means, from grants to graduation paths, and to hear directly from employers what skills they need. Reed said, "We're really trying to reimagine the college fair and focus on the needs of students, rather than on the convenience of college recruiters."

A Roadmap Out of Poverty
"Curing poverty from the child up"