Warm-up for another urban rail campaign 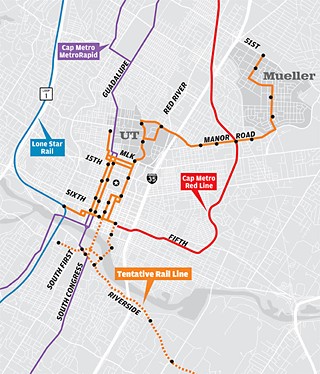 Austin Urban Rail: Local and regional officials are floating several map variations for Austin's multimodal future. This is a hybrid version, showing both the Mueller spur, the north/south routes along Guadalupe/Lavaca, and – with less near-future certainty – a rail line running south of Lady Bird Lake.

As pitchers and catchers reported this week to baseball's annual spring training hopefest, Rob Spillar turned to a seasonally appropriate metaphor. "I've never been afraid to compete on this team," the director of the city's transportation department says. "This town has a lot going for it."

Spillar is referring to the widely touted national competitiveness of the city of Aus­tin. But his current project is urban rail. In that regard, it's been a rough few outings for the Austin ball club; a 2000 rail vote was narrowly rejected, and a 2010 effort didn't quite make the ballot, nor did an early drive to shoot for a 2012 vote. Transit advocates continue to push for trains, but they disagree on the proposed routes.

Now, following a strong push from Mayor Lee Leffingwell earlier this month in his State of the City speech, Spillar and his team are gearing up for an expected 2014 public rail vote. Competitiveness for federal rail dollars aside, a very loaded question remains: Will that finally be the year that Austin residents say yes to urban rail?

Two November 2012 votes might help the rail case. According to Spillar, the increasingly dense center of Austin is already a distinction for potential federal rail money. The proposition that paved the way for a new University of Texas medical school gives rail proponents another major Down­town job site. "There are other urban areas to have that kind of development activity in their core," he notes. "In terms of concentration of employment at its core," Spillar says, Austin "is like fourth in the country ... and that's good for transit because it means a lot of people are coming in and going out."

Affordable housing is also shaping up to be a major factor in the push for federal dollars. The November failure of six years worth of housing bonds left the city strapped and looking for creative ways to boost affordable housing. Though federal dollars for rail wouldn't pay for such projects, they would be linked to the city's efforts in that direction. Council Member Laura Morrison said this would be "one more tool ... to make sure we push really hard for affordable housing." 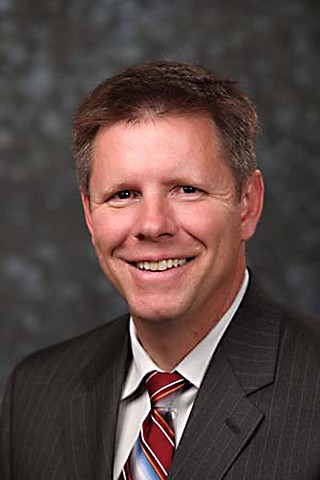 "The feds are now on board and clearly understand that for transit and density to be successful ... we absolutely need to make sure that there's plenty of affordable housing, so that we have places for middle class and lower income folks to live," Morrison said.

Thanks to partnership discussions between the city, Capital Metro, and Lone­ Star Rail, Spillar and company continue to look for other funding sources. "For the first time, we are re-thinking our understanding of, for lack of a better term, 'color of money,'" he says. "Bond monies are really good for capital funds; sales tax monies are really good for operating funds; grants are even better than either one of those for capital expenditures because we're not paying for it – but we haven't always thought of those."

The transportation department is set for public outreach this spring and summer that will, among other items, consider the proposed routes – from the Mueller development south, but not yet across the river – for the early phase of rail. A vocal group of rail advocates, including Urban Transpor­ta­tion Commission member Jace Deloney, are ready for that discussion. Deloney says that as a "transit advocate" he "love[s] the public transportation system here in Aus­tin," and rides it every day.

He is not so enamored of the Mueller route. Deloney says the first phase of the project should be based on ridership, and, by that calculation, the still-in-development Mueller should not be in the early mix. It will be a "waste of money," he says, "if we go down [any street] but Guadalupe." He says inclusion of Mueller is a nod to a far-off vision of Austin life. "It's really about whether we're going to provide a transportation system for people who live in Austin now, or 40 years from now."

Spillar and his team strongly disagree. Transit to Mueller, Spillar says, could enable much more density in the area – the equivalent of going from three to five stories – as well as boost the city's federal bid thanks to the affordable housing scattered throughout the development. They also say Mueller is becoming a jobs center and will thus be both a logical stop and another notch on the matrix for big government money. Spil­lar says the total figure for a rail line that runs south from the Mueller development, including contingencies and interest payments, could reach as high as $600 million. But he hopes to offset as much as half of that with those potential federal rail dollars.

That $600 million for the first phase does not include an extension south of the river, along East Riverside to Austin-Bergstrom International Airport, which could double the price tag and is not likely to be included in a 2014 vote. For Spillar, that segment of the route also depends on development coming to meet it. "Airports in and of themselves typically don't generate a lot of ridership," he said.

For those who remember the 2010 season, that line will be familiar – and it's likely to cause some debate, as is the rest of the 2013 edition of what's becoming something of a tradition. Entering the new rail season, Spillar appears to be already in midseason form: hope, spring, and all that. 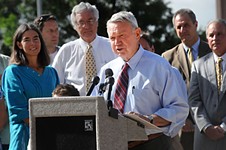