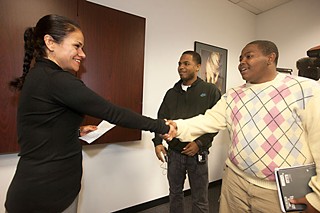 › The next City Council meeting is Feb. 28 (work session Feb. 26), when Austin Energy delivers its postponed quarterly briefing, and the usual brace of zoning cases raises hackles on all sides. Last week, Council moved toward creating an independent board to oversee AE and passed several midyear budget adjustments, including $10 million for affordable housing, and public safety funding for a 24-hour biking pilot program on certain trails. See "Budget Games," p.22.

› On Wednesday morning, former Austin state Sen. Gonzalo Barrientos announced he would not run next year for Travis County judge to replace the retiring Sam Biscoe, but would instead encourage Pct. 2 Commissioner Sarah Eckhardt to run. Eckhardt said she's considering it, but would have to resign in order to do so. County Democratic Party Chair Andy Brown has already declared for the office.

› Texas Campaign for the Environment reached a settlement in its lawsuit against the Lower Colorado River Authority over its operation of the Fayette Power Project – an agreement that TCE said should result in an estimated annual reduction of 100 tons of soot emissions.

› A federal jury on Feb. 14 convicted Jose Pardo and Jorge Carrillo for their roles in a heroin trafficking ring that operated in and around Jovita's Tex-Mex restaurant in South Austin. Amado "Mayo" Pardo, Jovita's patriarch and Jose's younger brother, who federal prosecutors say led the drug operation, died in January before he could be tried. Pardo and Carrillo are scheduled for sentencing May 3.

› Jurors have entered deliberation in the trial of Gabrielle Nestande, a former legislative staffer, being prosecuted for the death of Courtney Grif­fin in May 2011, on charges of manslaughter, intoxication manslaughter, and failure to stop and render aid after striking Griffin with her car.

› At press time, Judge Lee Yeakel was considering whether a civil rights suit against APD Officer Nathan Wagner should go forward. Wagner shot and killed 20-year-old Byron Carter in May 2011. He's arguing the suit should be dismissed because he and his partner were in imminent danger of being hit by the car at the time Wagner repeatedly fired his gun into its cabin.

› The big Save Texas Schools march and rally begins Saturday morning, Feb. 23, at 10:45am, on the Congress Avenue Bridge. The march to the Capitol will be followed by a rally (noon-1:30) on the south steps – speakers include Diane Ravitch, Superintendent John Kuhn, Rep. Mike Villar­re­al, former TEA Commissioner Robert Scott, and a host of others.

› At press time, the execution of Carl Blue was set to be carried out tonight, Thursday, Feb. 21. Blue was convicted of throwing gasoline onto a former girlfriend and lighting her on fire.