The Pain of Change at the Springs

It's hardly a secret that making changes to Barton Springs Pool is no easy task. For context – repairs to the culvert and dam that are currently under way took more than four years to get a stamp of approval from the Austin City Council. And they were considered an emergency.

Cosmetic changes, like those suggested in the ongoing master plan process, have been revised again and again at the city and have, at times, brought out the worst in each side. Last week, at the Environmental Board, the discussion had barely begun before "bringing in security" was mentioned by the chair (an act which, thankfully, didn't need to happen.)

Each phase of the plan has been the staging ground for a separate battle. The most recent: a thwarted south gate redesign. The most legendary: the scrapping of the extremely ill-advised plan to raze 30 trees in 2009. And, perhaps, with that attempt in the rearview mirror, every aspect seems larger than its actual size, no conspiracy too outlandish, no facet above suspicion.

It might be considered a triumph, then, that after more than four years, there are only two major sticking points with the current incarnation of the plan. Designs for the north side, which sees the most traffic, are currently without controversy.

The biggest remaining beef is with an ADA-compliant path and overlook to a south side historical monument. It would enable Austinites with disabilities access to the south slope for the first time. At a meeting held at the pool, those with disabilities were assisted out to the monument for the first time. Those in attendance describe the moment as "emotional," and many, including Environmental Board member Mary Ann Neely, see the creation of the path as simply "the right thing to do."

Opponents argue that the path defies the master plan, which calls for the south slope to remain as natural and unchanged as possible. They worry about the changes a path could bring to the south hill, which is frequently described as "spiritual."

David Wittie with ADAPT of Texas told the Chronicle that his group had compromised over many south slope details in the past. He explained that they had agreed to move ramps and backed away from intruding into the depths of the south lawn – where people had expressed concerns that a path would interfere with yoga practiced in the area. However, they were unwilling to forsake access to the south hill and monument entirely.

Critics are also wary of plans for the south parking lot, which will expand the current 80 gravel spaces to 125 paved spaces – doubling its area and increasing impervious cover in a move that Bill Bunch of the Save Our Springs Alliance has called a dangerous precedent for development.

Engineers on the project assure stakeholders that the switch will benefit water quality by reducing the silty runoff that currently plagues the lot. They say the current lot is dusty and badly engineered so that it funnels dirty runoff during storms. The new lot will control storm runoff, using grading to disperse water, and use a vegetative filter to treat water before it hits the springs.

Some people remain incredulous. The Environmental Board demanded more information about the lot, among other things, and will reconsider the project at their next meeting Feb. 20. Dean Rindy, who sits on the Waterfront Planning Advisory Board, endorsed the plan with the rest of his cohorts, but not without an ominous proclamation:

"I'm going to vote for the parking lot on the basis of being assured that it will actually do more to control pollution and runoff than the existing caliche pit," said Rindy. "I have been on city boards before and have been told things before that were not true. I'm sure that the staff is telling me things tonight that are absolutely true – to the best of your knowledge – but I want to be absolutely clear ... that's why I am voting on the increased parking."

Right now, City Council is slated to weigh in on March 7 if everything, improbably, proceeds on schedule from this point forward.

If you find this fills your heart with a sadness that this signals an end to conversation over Barton Springs Pool, fear not. Not only are renovations for the bathhouse on the horizon – on Tuesday, the Waterfront Planning Advisory Board successfully roused a discussion about whether Austin ought not to limit the number of people allowed in Barton Springs – staff said that discussion had started earlier that very morning, prompting nervous laughter from those at the meeting. 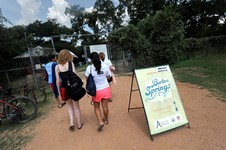 Then There's This: Showdown at the Springs
Does the pool's south side need a makeover?

Barton Springs Pool, Environmental Board, Waterfront Planning Advisory Board, Save Our Springs Alliance